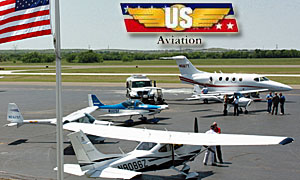 US Aviation, a big successful operation in Texas, manages to integrate LSA with general aviation.

Part of US Aviation’s fleet of LSA, parked among the bizjets.

US Aviation is growing rapidly and doing so with style. 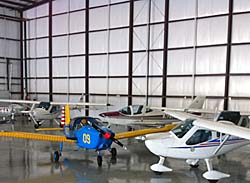 Almost lost in the giant hangars owned by US Aviation are many Light-Sport Aircraft.

Guest contributor Scott Severen joined US Aviation and brought a wealth of LSA expertise with him.

Flight schools —- like many private buyers — are hyperfocused on, “What does an aircraft cost to operate?” Busy flight schools operating at high volume simply must track how all the pennies add up. In this article we asked US Aviation’s Scott Severen for info (based on an earlier post). Why US Aviation? While much of aviation has been down in the dumps, this Texas operation has been growing rapidly. Everybody is else down. They’re up. How to explain? Could it be the company’s willingness to embrace change?

*** “Many factors drive the operational experience and maintenance costs in flight school,” wrote Scott. “If a facility is set up for a particular type of aircraft, with flight instructors knowing the aircraft intimately, with experienced mechanics well trained in the upkeep of that aircraft, and a parts department with well-established suppliers, then you can create a business model to work very efficiently.

*** “Let’s elaborate. Our flight school has over 70 aircraft, mostly Cessna 152s and 172s, (arguably the two most common training aircraft on the planet). To support the school, we employ over 20 full time A&P and IA mechanics, well versed in the venerable aircraft. Our flight instructors are steeped in General Aviation and very experienced with training students through to ATP. US Aviation’s well-rehearsed business is able to take advantage of existing systems, infrastructure, and the economies of scale associated with high volumes of repetitive work.

*** “Now, thanks to entrepreneurs smitten with aviation, US Aviation was introduced to a new type of aircraft. This plane is designed with new materials that require different maintenance training and methods, uses parts that are not yet flowing through established distribution channels, runs a reliable, mass produced, new technology engine but one that is foreign (literally and figuratively) to your mechanics. Put this in your existing business model and what happens? Your costs go up. The systems in place don’t match the new aircraft types, and that sector’s industry isn’t fully developed.

*** “Let’s imagine you have a flight school with a bunch of Light-Sport Aircraft — close to 100 of the top selling LSA (set aside the purchase cost for 100 new aircraft!). You and your staff know these aircraft well: a precondition to stay in business. The flight instructors have history teaching in Light-Sport and understand the customers. You know where to get parts even though there are not too many suppliers (you probably know most of them). Your systems are in place and the business works well. Suppose our theoretical flight school introduces a few Cessna 172s into the mix. The Rotax trained mechanics start scratching their heads, ‘Where’s the gearbox? How does the airplane fly with the engine barely running above idle? Look at the size of that oil filter!’ Your business is just not set up for this. You have to figure out how to create new systems and get new maintenance training. All the instructors need to transition from driving new sports cars to driving older sedans. Operating costs increase because it is a different business than the well-rehearsed (LSA) business you know so well.

*** “Our hypothetical flight school is passionate about aviation, in it for the long haul and wants to make it all work. Choosing to operate both businesses (Cessna 172s integrated into a large LSA flight school), leaders step up to the plate, bring in people that know the industry, get flight instructors passionate about their realm of flight, train mechanics to different technologies and watch the expenses reduce as both business models take off.”

*** What Scott describes in his parable is the situation at US Aviation, a big, growing, successful GA flight school bringing in “upstart” Light-Sport Aircraft. It isn’t easy, but they are determined to make it work because people like Scott Severen see the future of aviation with LSA being deeply involved. Thanks to Scott for this (hopefully ever less) rare viewpoint.