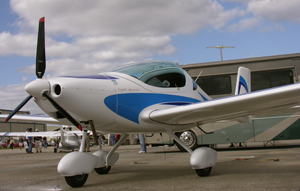 An evolution in design, Mystique shows the camera a beautiful shape. LSA America sells the new model alongside the earlier Skyboy; manufactured respectively by Interplane Aircraft and Flying Machines.

LSA America is a newly formed company separate from but associated with Fantasy Air USA, importer of the very successful Allegro*. The new company displayed their Mystique from Flying Machines, which won SLSA #46 just before the Sebring LSA Expo. This lovely bird has smooth flowing lines all the way to a squared off vertical stabilizer. I took a test flight in Mystique to find a light handling airplane with huge visibility. Built in the Czech Republic, Mystique joins Interplane’s Skyboy in LSA America’s lineup. Mystique has a contemporary appearance and equipment neatly fitting the LSA mold and looks second generation compared to the low-cost Skyboy. Look for my report in EAA Sport Pilot soon (perhaps the March or April 2007 issue). On less than 26 feet of span, Mystique boasts a 15:1 glide; such performance is hard to judge in an hour flight but clearly Mystique held energy well. LSA America says delivery is possible in 3-4 months. *Fantasy Air also introduced their new Allegro 2007 with significant improvements at Sebring.