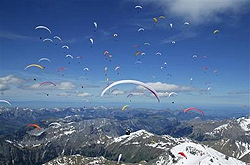 According to news released by the Associated Press, dozens of paragliders (the unpowered sort) flew in competition above the picturesque Swiss Alps during the Swiss Paragliding Championships in late May this year. One of the competitors, Martin Scheel, snapped this impressive photo. It is not a doctored or “PhotoShopped” image but reveals the close-in flying done by these lightest-of-all aircraft. Paragliders fly from 25-40 mph and some claim glide angles of 7:1. Any of them can be carried in an oversized backpack. For more info on American paragliding, contact the U. S. Hang Gliding Association.