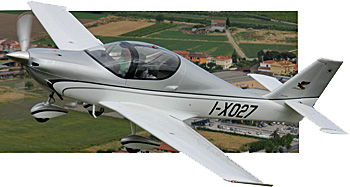 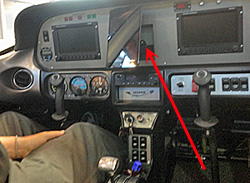 Astore comes standard with an Apple iPad® mini on a swivel mount (arrow).

I just wrote about Van’s Aircraft, a 41-year-old company that just came out with their first ready-to-fly airplane. Now I want to talk about a 65-year-old company and a 65-year old airplane design, Astore. First came a 1948 Astore. Recently the 2013 Astore — just unveiled to the public last month at the Aero show — took to the air on its first flight. The Italian company showed again that they can take one of Professor Luigi’s new designs and achieve it in a remarkably short time. Head of Aircraft Design for Tecnam through the decades, Luigi Pascale will celebrate his 90th birthday later this year. As a young man he designed the first Astore and many more aircraft since. Yet this senior engineer seemingly doesn’t need a rest. Company Managing Director Paolo Pascale said of his uncle, “He is enjoying the design work … it keeps him alive!” Watch our
video interview with Paolo to hear more about the new model.

Astore’s instrument panel incorporates an Apple iPad® mini that is supplied with each aircraft as standard equipment. Combined with Levil’s G Mini and using its WiFi connection, iPad® Mini provides a full primary flight display using compatible third party applications such as Air Navigation Pro or similar. Additionally, Tecnam reports a pre-installed, dedicated app will compute the actual weight and balance, provide checklists, and include all the Pilot Operating Handbook sections. “Low operating costs are assured through Tecnam’s close association with Rotax Aircraft Engines,” added the company. Teaming up with the leading engine producer joined to an efficient airframe, Tecnam offers customers a choice: the proven carbureted Rotax 912ULS, fuel injected 912iS, or the turbocharged Rotax 914 engine … any of which can work on mogas, avgas, or a mixture of either in any ratio.