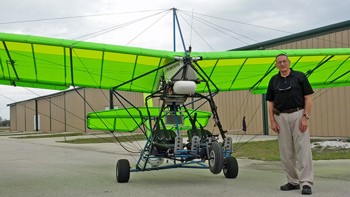 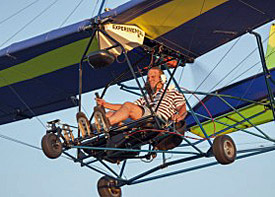 Hanging out in the breeze: what a kick! 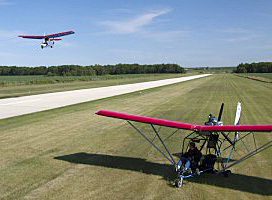 You don't need an airport to fly an ultralight but it's always nice to have one. 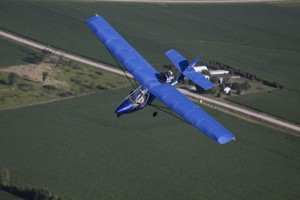 Quicksilvers come in enclosed cabins too, like this GT400. There's also a GT500 tandem two-seater.

It’s enough to be proud of flying a “real” airplane for 50 years without accident, incident, or citation for 50 years. But imagine if half of those years were flown in those crazy “death wish” machines: ultralights! Of course, those of us who’ve flown hang gliders, ultralights and other true bird experience aircraft know just how safe they are. Anything you fly requires skill but also flying it within its strengths and limitations – that’s the only fail-safe secret to safe flying.

Nobody knows that truth better than George Karamitis. He’s just received the FAA’s Wright Brothers Master Pilot Award, for half a century of impeccable flying in both GA airplanes and the all-time best selling ultralight, the Quicksilver. George started out like a lot of us did, gawking through the fence as a kid at his home airport, Oshkosh’s Wittman Field. The veteran aviation icon and airport namesake himself, Steve Wittman, gave wee Georgie a ride one day, which sure beat hanging out in the family bathroom at home, as he liked to do, sitting on the toilet seat lid and pretending to fly with a plunger for a joystick!

A stint as a radar operator in the Navy led to George forming a swabbie flying club in Newfoundland. He earned his Private Pilot ticket, then at the University of Oshkosh he formed another flying club, flew a Cessna 140, and got his CFI ticket in 1966. Life flew by: in 2001, the Oshkosh sky boy retired as a Captain after 33 years flying for Trans World Airlines. You can take the boy out of the cockpit but never the cockpit out of the boy. Even while working for TWA, he’d been plying the skies in several Quicksilvers, starting out with a Sport II two-seater.“

I’ve been a Quicksilver fan for over 25 years,” says George. He’s owned a number of Quicks and a dozen GA planes too. Over time his stable included a Sprint II, single seat GT400, single place Sport and single seat Sprint. The Sprint and Sport are open cockpit side-by-side models. The Sport has a double-surface wing while the Sprint is a single surface membrane. Quicksilver over the years have made the most of the tube-and-Dacron fabric, steel cable-braced minimal airframe. And if you’ve never had the pleasure, you really don’t know what you’re missing…unless flitting along at 40 mph (stall is typically in the low 30 mph regime) five feet above a cornfield doesn’t hold any particular thrill for you. There’s simply nothing like an ultralight for easy, fun flying.

After thousands of hours wrangling airliners, George admits, “I love sitting out in the open!” in an ultralight. Today his Quick of choice is a Sprint II in which he gives demo flights. “I couldn’t write a better story than I’ve lived,” says the veteran award winner. He continues to train student pilots at Lockwood Aviation, Sebring, Florida, in a Tecnam Echo LSA. You know, some kids just never grow up. And that’s a good thing for the rest of us.