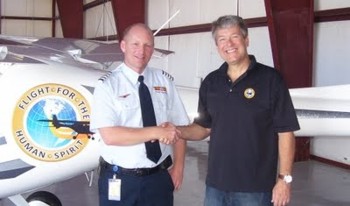 At this summer’s Oshkosh fly-in, I had the pleasure to meet an inspiring new pilot, Michael Combs, who briefed me on his plans to fly a Remos GX to every state in the US of A, beginning next spring. *** Good news: Michael just finished his check ride – that’s him below with his CFI, Justin Shelley of U.S. Flight Academy– and is now a happily licensed Sport Pilot. Congratulations Mike! *** The odyssey flight will serve as more than just an adventurous lark, although that would certainly be enough motivation for most of us. The intrepid fledgling pilot – and a survivor of a serious illness – will make 135 stops during the inspirational mission, dubbed “Flight For The Human Spirit”, to champion what he recently described as “…proof of human capability and of accomplishing what you are able to dream.” *** He intends to demonstrate, in dramatic fashion, that “a Sport Pilot license is a passport to unlimited adventure…a celebration of freedom.” *** Mike estimates he’ll have more than 100 flight hours under his belt by the time the 40-day trip launches. He’ll have all the latest electronic nav gear, including XM weather and satellite tracking that will update his progress every two minutes, which you can follow on his website: www.flightforthehumanspirit.com. *** —photo courtesy Remos Aircraft