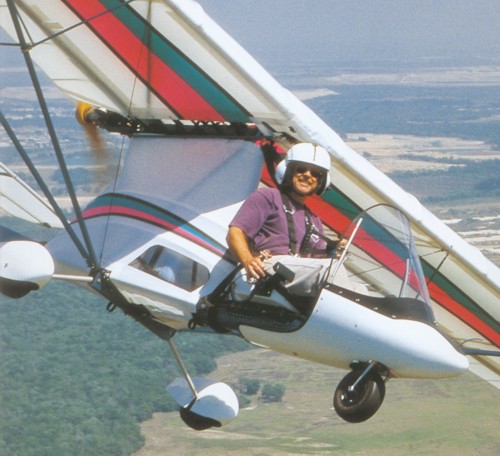 ST. PAUL, MINN. – Light recreational aircraft expert Dan Johnson celebrated 30 years of writing flight reports with the publication of his February 2006 articles.
Johnson, a leading reviewer of ultralights and light-sport aircraft, has flown and evaluated more than 300 different models of aircraft and written more than 600 flight reports. He has logged more than 5,000 flight hours and holds a commercial certificate with instrument, multi-engine, and flight instructor ratings.
Johnson began his writing career 30 years ago, publishing his first article in the premier February 1976 issue of Glider Rider, now known as Ultralight Flying! From 1978 to 1986, he was publisher of Whole Air magazine, a publication he sold to Western Flyer, now published as General Aviation News, in 1986.
In subsequent years, Johnson returned to producing monthly flight reports for Ultralight Flying! and began contributing regularly to EAA Experimenter, EAA Sport Pilot & Light-Sport Aircraft, Kitplanes, General Aviation News, and Hang Gliding & Paragliding as well as two international magazines, Volare and Fly & Glide. In 2004, Johnson launched the website wwwByDanJohnson.com, offering access to hundreds of his flight reports and thousands of photos, as well as creating specialized features to help pilots choose an aircraft.
Recently, Johnson was named chairman of the board of the Light Aircraft Manufacturers Association (LAMA). In accepting that appointment, Johnson announced that he would retire his columns “Product Lines” (Hang Gliding and Paragliding magazine) and “The Light Stuff” (Kitplanes magazine). The hang gliding column has run continuously for 27 years – “|without ever missing an issue,” said Johnson – making it a significant historical record for that segment of soaring flight. His “Light Stuff” column has run for 14 years, with 150 articles on a variety of topics about light, recreational flying.
“I give up those two columns somewhat reluctantly,” Johnson admitted. “They’ve been a part of my life for decades. But with the advent of the sport pilot and light-sport aircraft rule, I want to pursue some excellent opportunities available to me.” Johnson consults for several clients, including EAA, on marketing light recreational aviation.
“I will continue writing full-length pilot reports, and I look forward to flying the many new aircraft being developed all over the world,” Johnson stated. “Light sport aviation is a dynamic, fast-growing sector, full of talented and interesting people. I expect to serve this aviation segment for many years.”