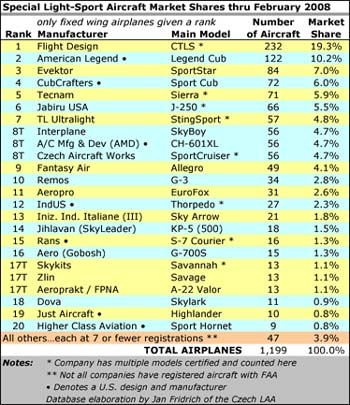 The ranking order changes again even while the top three hold their leadership positions. Note the gain of CubCrafters now brings the sum of little yellow taildraggers (with American Legend and Zlin’s Savage) to an impressive 17.3% of all fixed wing registrations.

The U.S. economy is hardly crashing, but while slipping backwards in late 2007 and early 2008, it has been on a bumpy plateau. This unevenness causes trouble for many businesses. Even giant coffee seller, Starbucks, is rejiggering their business model to adjust for folks balking at $4 coffee while their stock portfolio lurches up and down. Light-Sport Aircraft sales also reflect that lack of consumer confidence. *** Figures for the first two months of 2008 show slightly more than 40 aircraft registrations per month. In 2007, the industry averaged 47 aircraft registrations per month. Of course, this 15% decrease also comes while many northern states have endured awful winter flying weather, partially explaining why sales are off the beat. Despite a cloudy overcast some bright spots emerge. *** CZAW‘s SportCruiser led the pack with more than 17% growth during January and February. AMD is close behind with 14% growth, and CubCrafters continues their climb with 7.5% growth. Newly ranked companies appearing on the list include Gobosh (G-700S) and U.S. producers Just Aircraft (Highlander) and Higher Class Aviation (Sport Hornet). Common in every industry, larger companies have difficulty maintaining high percentage growth as their overall numbers increase.