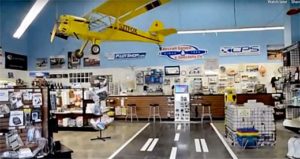 You know Aircraft Spruce. So do all your flying buddies. Cutting to the chase, if you are involved in airplanes other than airlines and military, you not only know Aircraft Spruce, you’ve probably bought from them. Raise your hand if you never ordered from “Spruce,” as many abbreviate it. OK, no hands. I thought so.

It wasn’t always so.

Spruce …and So Much More

Well, supplying wood to build airplanes is ancient history now, you might say. If you said this, you would not be alone but you’d be absolutely wrong. 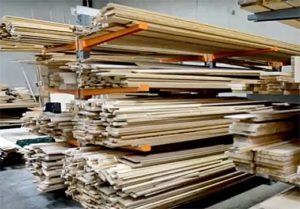 Wood remains an important part of sales for Aircraft Spruce.

On a recent tour of the bustling enterprise headquarters in Corona, California, the first thing Bryan Toepfer showed us was the lumber shop. Even today, that shop was large and active with a longtime employee slicing lumber to order. “It’s still a major part of the business,” said Bryan, himself expressing some amazement at this fact. Bryan is known to many LSA owners and lots of Sport Pilot kit builders as he runs a related (but separate) business called California Power Systems. They have a busy operation representing Rotax Aircraft Engines and more.

Yes, wood remains an important part of the business even though the 62,000 square foot facility was chock full of all manner of goods and gear that pilots and aircraft builders want to buy.

Customers range from you and me to numerous airframe builders. Many of them buy essential materials from Spruce. The company also has a metal shop and a recently upgraded avionics shop where they can provide full wiring harnesses for nearly every kit aircraft in imagination. Of course, they have row after row of long isles with tall shelving units bursting with items all neatly organized by type and bar-coded for fast delivery. Get an order into Spruce before 4 PM and it will ship that same day. Heck, even gigantic Amazon can’t do better than that.

Spruce Pops Up Everywhere
(and not just their thick catalogs)

Now you know why I refer to this company the “Amazon of Aviation.” Also like that other mail-order outfit, Spruce has multiple locations to hasten deliveries so those builder projects are not interrupted. (“Hell hath no fury like a aircraft kit builder delayed.”) 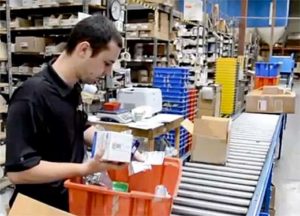 Orders fill into ubiquitous plastic tubs that will be shipped same day.

Today, Spruce has operations in California, Georgia, Illinois, Alaska, and Canada. Plus, as airshow attendees know, you can find a substantial number of the most popular items at almost any event you attend. Among aviation brands, Aircraft Spruce is everywhere.

More than 300 employees in those five locations provide more pilot gear than any other outfit in personal aviation. Even after decades of development and innovative operations plus acquisitions of several other enterprises, amazingly, the single product Mom Flo first offered still makes up a noteworthy share of the enterprise.

“Aircraft Spruce & Specialty Company strives to carry everything a pilot could need, including pilot supplies and aircraft parts, always at the lowest prices,” said company spokesmen we met on our tour. Spruce supplies components for a wide variety of homebuilt aircraft including the Lancair, Vans Aircraft, Cozy, Starduster and Europa, as well as factory built parts for Cessna, Piper, Beech, and Mooney. Yet it isn’t all nuts and bolts (and wood). 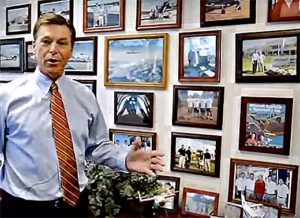 Aircraft Spruce president Jim Irwin captures memories, frames them, and fills the facility’s offices and halls with aviation images. “You can often find him here on a Sunday, changing or adding photos,” said Bryan Toepfer.

Bob and Flo’s oldest son Jim Irwin grew up in the business, working in jobs such as cutting metal and spruce, pulling and shipping orders, and managing kit programs such as the Vari-Eze back in 1975 while still in college. In 1978, Jim acquired the company and became president in 1980 joined by his wife Nanci. Today, it’s a full family affair with three of Jim and Nanci’s sons — Mike, Jeff and Rob — filling management positions with the company.

The Irwin family remains based in Southern California but in 2004, Aircraft Spruce East moved into a new 52,000 square foot facility in Peachtree City, Georgia. As we toured the California operation, Bryan explained that the Georgia operation is identically-laid-out to the Corona warehouse and it does approximately the same amount of business. 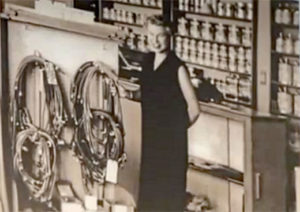 Add it up and you find a 54 year-old enterprise with a total of 400,000 square feet in five facilities.

Does my Amazon comparison sound about right?

Images for this post came from a 2015 video titled, “EAA Chapter Videos—Inside Aircraft Spruce,” where you can learn more about this dynamic company.