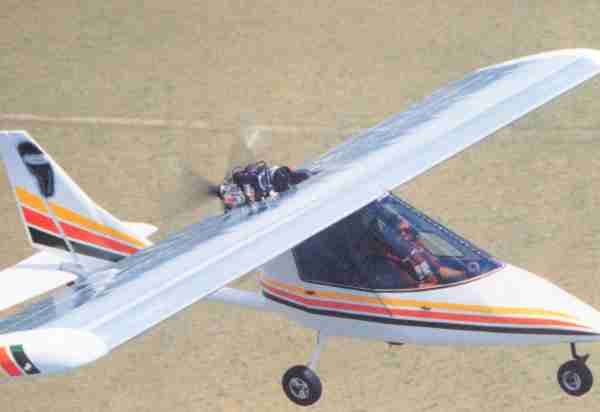 In the last year, the Titan company scored a huge media success by having its Tornado appear on the popular TV show Northern Exposure. On the show, pilot character, Maggie, builds and flies the Tornado and the entire episode deals with the aircraft intimately. Titan boss John Williams was hired to provide technical consultation and the show gave a welcome boost to ultralight aviation.
How they chose this airplane over another is no mystery to anyone who’s flown the dashing design. The Tornado is available in a single and two seat model, each of which flies beautifully. One glance confirms an image of speed and snappy handling but these qualities don’t come with a penalty. Both aircraft can also slow down well, and exhibit forgiving takeoff and landing characteristics.
Appearances are important and the Titan aircraft excel in this area. In addition to strikingly raked lines, the planes are built from materials that suggest a long life. The all-aluminum wing not only holds up well to Mother Nature, but works much harder than its tight span implies. An aluminum tail and fuselage pod cover a welded steel inner structure that helps assure a long and successful career of recreational flying.
Titan has also introduced a 103 Tornado, which gives up some of the aluminum for dope and fabric covering so as to qualify under the 254 pound limit of the ultralight regulation. For this achievement, Titan picked up an airshow award. As with many of the very lightest ultralights, the 103 Tornado exhibits beautiful handling plus mild takeoff and landing features. For a plane with many advantages and great flying qualities, you can hardly go wrong with a Tornado.
Titan was featured in the April 1994 issue.