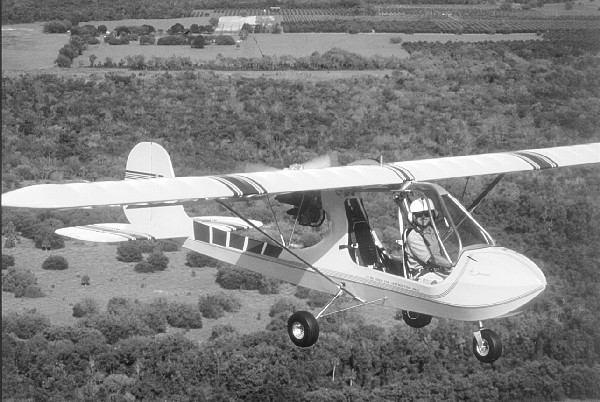 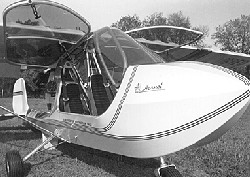 GULL WING – When fitted with the gracefully curved side doors, the Hornet resembles an Italian sports car. In Florida’s heat, the doors weren’t needed. 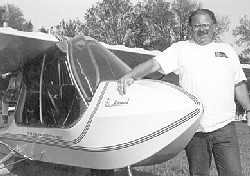 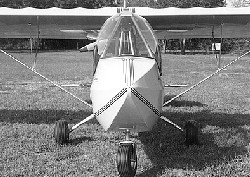 HEAD ON – Looking distinctly like a Challenger from this perspective, in fact the Hornet is quite original in many ways. Note the single struts. 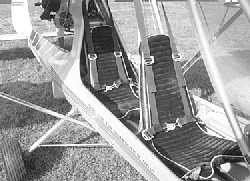 SECURE SEATS – Both fore and aft seats in the Hornet offer 4-point shoulder restraints, a feature that probably ought to be standard on all ultralight designs. 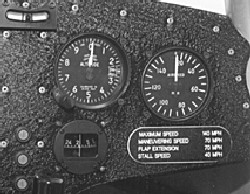 IMPORTANT PLACARD – This placard reads “Maximum Speed 140 mph,” an inscription that led to a riveting experience. See the main article and sidebar for details. 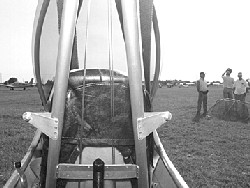 REAR VIEW – From the rear seat, the Hornet offers pretty fair visibility for a tandem configuration. Full controls are also standard in the aft position. 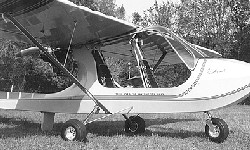 BIG TANDEM – You’ll have a lot of room inside your Hornet, and with tandem seating in an open cockpit like this, the width of the occupants is hardly an issue. 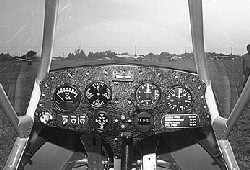 WELL-PROTECTED – The full windscreen of the Hornet works especially well, at least for the front pilot, keeping all breeze off your face. 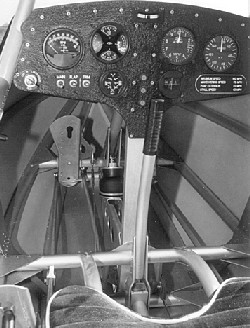 FULL CONTROLS – The Hornet’s control layout is convenient and innovative. The brake lever operates by pulling aft on the joystick. Also note the left rudder pedal by the front seat and the cable held in it; this operates the tailstand. 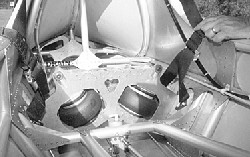 AIR BAGS? – Here you see the twin Goodyear shock absorbers that do such a commendable job on this aircraft. Even hard landings don’t feel too bad thanks to this installation.

Let’s cut right to the chase. Flying the Hornet for the second time in a couple of years (the second flight was in April ’96), I experienced a most disconcerting quality: flutter. While I have many good things to say about the Hornet, this one experience elbows its way to the front of the line. Easing into the “Pilot’s Report” on the Hornet simply isn’t possible when such an experience dominates my thinking.

Cons – While the innovations are interesting, some are not executed in the customary way of aviation designers – for example, the brake actuation by pulling full aft stick. Nonstandard methods means the pilot may need to learn new techniques. Tailstand adds weight (though it did make entry easier). Elevator problem was troubling, as the factory didn’t initially catch it themselves.

Pros – Entry and exit are quite reasonable, especially with the tailstand holding the Hornet level. Four-point seat belts were appreciated. Without side enclosures cabin seems huge – broad pilots will like the roominess. Seats comfortable; backrest was tall and offered good support. Most controls within an easy reach.

Cons – Rudder pedals were angled awkwardly for my use (though builders can change these things). No baggage/cargo area (except the rear seat when flying solo). Open cockpit seemed noisier than similar designs.

Pros – Visibility is very good from the front seat whether on the ground or in flight. Even the rear has decent visibility (and is better than many tandems). Suspension by Goodyear was excellent – firm yet well-dampened. Turn radius was tight. Very good clearance for rough-field use.

Cons – Brake on the aft of the stick range is clever but nonstandard even among ultralight aircraft. Because the Hornet sat so lightly on the nose, nosewheel effectiveness was diminished. Nondifferential braking lessened taxi maneuverability.

Pros – Ground roll on takeoff was short. Takeoff and landing visibility are as good as the best ultralights. Approach speeds can be held low, about 40 mph with practice. Landing out should be reasonable thanks to good clearance and excellent suspension system. Flaps were very useful, pitching the nose down to improve visibility on final. Hornet retains energy well for flare.

Cons – Crosswind landings done at the slowest speeds may run out of stick range. Slips weren’t very effective, as the Hornet lacks side area.

Pros – Although you can’t call them fast, controls were light and pleasant – many pilots prefer such a compromise. Coordination was good – precision turns to headings were accurate from the start. Adverse yaw was on the good side of average.

Cons – Since this flight evaluation, the factory has remedied the elevator problem, but they had not fully explored the speed range in a proper test regimen. Regrettably, this brings other performance statements into question – for example, I cannot accept as fact the high speeds of the airplane.

Pros – Power-off stalls broke mildly at speeds in the low 30s. Power-on stall never broke, instead just bucking around in an obvious protest that can guide your response. Longitudinal stability tests were good in spite of a nose-light trim condition.

Addresses the questions: “Will a buyer get what he/she expects to buy, and did the designer/builder achieve the chosen goal?”

Pros – Feature-filled design illustrating lots of innovation and many hours of effort. Very efficient flyer that performed well at very low power settings. Robust construction that will set most pilots at ease. Could operate under the 2-place training exemption to Part 103 based on empty weight (though extra weight of some options could restrict this use).

Cons – When equipped with engine, prop and the full kit, price is on the upper end of the ultralight spectrum. Most damning experience related to the elevator flutter problem. Factory has fixed this in the accepted way, but I have not rechecked the aircraft. You are advised to speak directly with the factory on this issue.