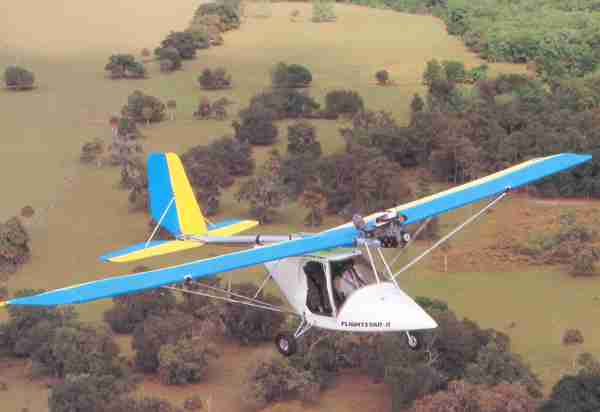 The popular Flightstar is solidly an American aircraft again after an excursion with overseas ownership. Original designer, Tom Peghiny, and his partner, Sparky LaMontagne, are majority owners in the Connecticut-based ultralight manufacturer. They’ve introduced four models to the community: Flightstar Classic (277 engine), Spyder (447-powered single place), Formula (deluxe full enclosure single seater) and Flightstar (top of the line two-place aircraft).
The Flightstar line distinguishes itself by featuring well engineered designs with cleanly executed hardware on a sleek, solid design. As they pass by in an airshow demonstration, viewers are pleased by the quiet performance of the machines. Factory pilots fly their two place model with the lighter 503 engine; it’s more than enough engine though you can add the more powerful 582. They go fast as well as slow and handle well at either end of the envelope. Present models offer flaps to further extend the speed range.
Efficiency is a watchword with the Flightstars. Qualities that prove this include low-noise, low-vibration operation, an ability to use less powerful engines, and the ability to stay aloft on deeply reduced power settings. You don’t have to be very technical to see the designs illustrate a great attention to detail.
A mature design, with nearly 1,000 flying all over the world, the Flightstar has been thoroughly analyzed and updated over the passage of time. Build times are very low owing to a builder-friendly design, factory built subassemblies, and slip-on Dacron wings. Cabin appointment contribute to an exceptionally quiet ultralight environment, and considerate control layout.
The latest Flightstars are real crowd pleasers, true, but more importantly, they please their pilot/owners. Just try to pry one away from his Flightstar.
Flightstar was featured in the October 1994 and November 1993 issues.