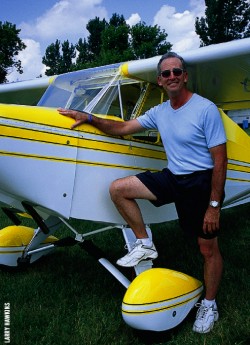 Dan Ward proudly poses with his Dakota Hawk, his first-ever airplane building project. Even though it took him longer to finish than he originally planned, he says if was a fun experience|and he’s ready to build another aircraft. One of the keys to finishing a project, he believes, is having a place at home to work on it. 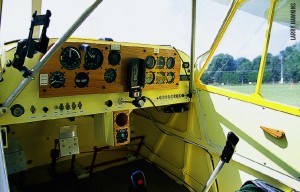 Dan’s neat and tidy instrument panel allows plenty of room for the full range of instruments he’s chosen to equip the aircraft with.

Dan Ward wanted to fly even as a little boy. He recalls his mother some years ago showing him a note he’d written in first grade detailing how he wanted to “grow up and be a pilot.” But, like many other would-be pilots, the constraints of time, money, and family responsibilities presented obstacles that kept him from reaching his goal.
In 1991, though, his wife, Dolores, told him he should go for it. Dan laughingly said he thinks she was tired of listening to him whine about wanting to fly. “Our daughters were getting older, so there was time in my schedule to start flying lessons.” In 1993, he earned his pilot certificate, and he knew his next goal was to build an airplane.
Dan then began researching aircraft designs. At EAA Oshkosh 1995, he was intently shopping. After taking a flight in the all-wood Dakota Hawk, he made his decision. “I’ve done a lot of woodworking, so I was comfortable working with wood.” He also had a goal of having an airplane that cruised at 100 mph. With the right powerplant, the Dakota Hawk would do that, if he kept the airplane light.
He ordered the kit at the air show, and took delivery of the first wing sub-kit on September 4, 1995. Six years and about 1,200 building hours later, on September 4, 2001, Dan made the first flight in his Dakota Hawk. That was a little longer than the two years he’d planned to spend on the project, but that was the only frustration he felt during the whole process. “Other than that, building this aircraft was nothing but fun along the way.”
Dan admitted that the learning curve for working with the engine installation, instruments, and wiring was pretty high, but that’s when he turned to his local EAA Chapter. “Ernie Clay is the Technical Counselor for our Chapter, and he was very helpful. I spent a lot of time reading through Tony Bingelis’ books and talking with other EAAers to learn what I needed,” he added.
He did agonize over his engine choice, but in the end opted for the lighter weight Rotax 912S rather than a Continental 85 or O-200. He chuckled, “I really became a true experimenter, then, because so far this is the only Dakota Hawk flying with a 912S. The folks at Fisher Flying Products helped me design the engine mount, which helped a great deal, but I had to reposition the oil and water coolers and dedicate some duct work and air intakes to keep the engine cool.” On his first flight, the engine overheated, but he was able to land without causing any problems. “When the events of September 11, 2001, grounded us for a while, I was able to work out my cooling problems.”
In the end, he did build a light aircraft|his Dakota Hawk has an empty weight of 630 pounds| and the aircraft does cruise nicely at 100 mph on the 100-hp 912S, and it stalls between 35-38 mph, providing a comfortable speed range. “I’ve seen 1,600 fpm climbs in cool clear weather, and 800 to 1,000 fpm in heavier, humid air,” Dan added.

Eleven years after realizing his first goal of becoming a pilot, Dan is enjoying his dream. “I wasn’t sure my dream would come true,” Dan added, “but I’ve proven you can fly without spending anymore than you would to enjoy boating or motorcycling as a hobby.”
Now, he’s working on his third goal of flying his airplane to as many aviation museums as he can. His trip to EAA AirVenture Oshkosh 2003 was the first step in fulfilling that goal. His fourth goal is to complete the workshop behind the new house he and his wife have recently moved into|so he’ll have a place to work on his fifth goal: building another airplane!