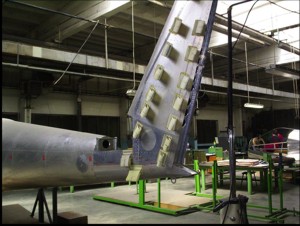 Straps on the vertical tail unit and index
numbers at each bulkhead on the KP-
5 production prototype are remnants
of the structural testing performed to
verify calculated load strength. A report
of the test procedure and results, along
with any subsequent modifications to
meet the certification standard, was
produced for each test area. In the
background workers assemble what
will become the first KP-5 to be issued
an S-LSA certificate. 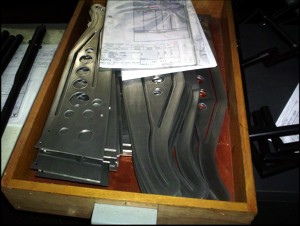 An incoming supply of flap tracks
have been inspected and placed in a
controlled parts storeroom, thereby
meeting an early step in the factory
quality control system. Documents follow
each part through the production
process including design drawing, assembly
instructions, inspection records,
and finally to the permanent archives
for each aircraft off the assembly line. 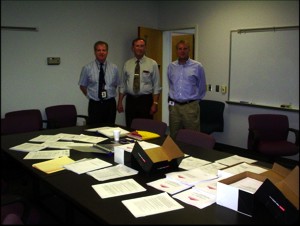 Prior to the first S-LSA inspections
for the KP-5, Kappa Aircraft owner
Edwin Miller (on right) and LSA consultant
Tom Gunnarson visited the
geographically closest MIDO in New
Cumberland, Pennsylvania. A morning
was spent reviewing the compliance
documentation and the inspection
process with MIDO personnel Robert
Costa (left) and Henry Cooper (center). 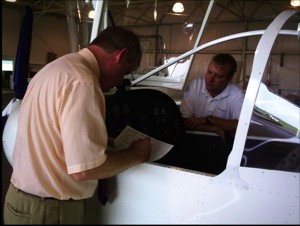 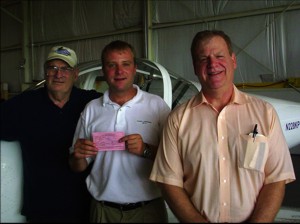 Tom Gunnarson
Recreational aircraft ownership can bring
great joy and satisfaction. From the pride of
knowing a plane is solely yours to outfitting it
to your personal tastes to the convenience of
flying it where and when you desire, private
ownership can bring many joys.

The new sport pilot and light-sport aircraft
(SP/LSA) regulations are reawakening interest
in basic flying in non-complex, two-seat aircraft
harkening to the golden age of aviation
when requirements for personal flight were
minimal. New-age materials, components,
and manufacturing processes, along with an
existing worldwide industry producing aircraft
to strict weight limits, have created a plethora
of ready-to-fly aerial deuce coupes just waiting
for the right regulatory environment to
burst on the American recreational aviation
scene. Not surprisingly then, the first aircraft
certificated in the special light-sport aircraft
(S-LSA) category were imports from Europe
where manufacturers have been building
these aircraft for 20 years.

The S-LSA certification process includes
many elements found in standard, productioncertificated
aircraft manufacturing. Unique
to LSA is the use of industry-generated consensus
standards in lieu of FAA standards.
Also, instead of the FAA certificating that a
manufacturer meets the standards, it relies on
a declarative system whereby a manufacturer
presents documentation to the FAA showing
that it has complied with FAA regulations and
the consensus standards specific to LSA.

Are you curious about this new development
in the lighter side of general aviation but
hesitant to jump in and buy one of the growing
number of ready-to-fly models without knowing
more about this new certification process?
Let’s take an abbreviated look at the process
and follow a real-life example of S-LSA certification
from start to finish.
A Three-Step Process
A manufacturer wishing to produce readyto-
fly aircraft in the LSA category must complete
three basic phases before a salesperson
can hand the keys over to a new owner.

Step One-The ASTM standard for the
design and performance of LSA describes the
minimum standards a manufacturer must
meet for the design, construction, flight envelope,
strength, and controllability of an LSA. A
manufacturer must document every step and
have test results to back them up. A manufacturer
must also produce a set of manuals
including aircraft operating instructions,
maintenance and inspection procedures, and
a flight-training supplement. The manufacturer
must also establish and maintain a
quality assurance program and a continuing
operational safety plan.

Step Two-Once an aircraft meeting the
LSA definition and complying with all ASTM
standards is produced and all documentation
is prepared, the manufacturer (or agent,
if the aircraft is imported) can request an
airworthiness inspection of the aircraft from
the local FAA office-either a Manufacturing
Inspection District Office (MIDO) or Flight
Standards District Office (FSDO). Prior to
the inspection, the manufacturer meets with
the MIDO or FSDO to review the compliance
documentation.

When the designated airworthiness representative
(DAR) or FAA inspector finds
everything in order, he or she will issue an
airworthiness certificate and operating limitations.
The aircraft is then ready to supply
to a customer.

Tom Gunnarson is a 25-year veteran of the recreational
aviation industry. He has managed
flight schools and aircraft sales and service
centers across the country. For 12 years, he
oversaw one of the national ultralight safety
programs, conducting more than 50 initial
and recurrency seminars for flight instructors
and examiners who trained and tested
more than 75,000 participants. Gunnarson
is a board member of the Light Aircraft
Manufacturers Association and a memberat-
large of the ASTM F37 executive subcommittee
on LSA. He is currently providing aviation-
consulting services specializing in LSA.
(Kappa Aircraft is one of his clients.) He can
be reached at tomgunnarson@earthlink.net.