James Weibe's latest Part 103
A Moller SkyCar for every garage? 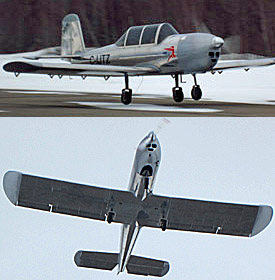 Several news items in our March 2013 LSA News Wrap and we’ll get to it … right after this: We’re thrilled to tell you that — for the second month in a row — ByDanJohnson.com achieved another record. Despite fewer days, February substantially exceeded January’s Unique Visitors, reaching another all-time traffic mark. Last year was amazing and 2013 is even better. THANKS so much for your regular visits and welcome to our new readers! Sam LS Flies — Pilots love new developments, so aviation media outlets jumped all over the first flight of Thierry Zibi’s Sam LS. The retro-looking, all-metal Light-Sport candidate (it has not yet gone through the Special LSA process and will initially be sold as a kit) attracted plenty of attention at the Sebring Sport Aviation Expo where the company bought a premium position just inside the main gate. By Sun ‘n Fun in less than one month, Thierry will hit another benchmark as the aircraft flies for the public.

FOLD 'EM - Though the process involves a few steps, the Jet Fox can fold its wings for compact storage.

ALL CURVES - This Jet Fox 97 head-on photo reveals not only style but a smoothly-shaped exterior that produced a good performance and a quiet interior.

FULL PANEL - You don't often see an ultralight panel this well loaded. The central Digifly-brand glass panel is for navigation; "steam gauges" give you flight and engine information.

PARACHUTE EQUIPPED - The "Danger" sign and the outline of an escape hatch plus the red handle inside shows Euro ALA chose to equip this plane with a ballistic parachute.

SERGIO THE PILOT - A smiling Italian name Sergio Cremonesi was more than pleased to show me Euro ALA's elegant aircraft.

UNDER WRAPS - Euro ALA manages to completely enclose the Rotax 912 engine inside their sleek cowl. Here's a peek underneath.

SECURE SEATING - Seats in the Jet Fox 97 proved comfortable and supportive. With secure restraint and a parachute, I felt well protected.

EVERY DETAIL - The nose fairing, wheel pant, and even the nose gear leg fairing show a great attention to detail, which serves both an aerodynamic and a visual purpose.

Pros - Sleek looks. Second-generation design (first was the Jet Fox 91) from an Italian company with 17 years experience in ultralights. Should conform to proposed Light-Sport Aircraft category, though generally operates like most U.S. ultralights. Superbly equipped. Has received German certification.

Cons - Somewhat "dated" design compared to many all-composite Euro sport planes (though Americans may not see it as old). Higher empty weight than U.S. buyers expect.

Cons - Lots of fancy systems drive up the price, no way around it. Did not use the Digifly navigation system; same for cabin heat. Repair work to the engine requires removal of the large cowling and inspecting the covered airframe is more time-consuming than an open ultralight.

Pros - Comfortable and spacious cabin. Unusually quiet - rare in ultralights to not need ear protection and I could still make conversation (though I always prefer to have ear protection). Entry/exit were quite easy thanks to wide doors that hinge on a center line. Small cargo area available.

Cons - Pistons that hold the doors during entry/exit were not installed ($36 option). No seat or rudder pedal adjustments for differing pilot height. Door latches were a bit tricky to get solidly latched. No other negatives.

Cons - The Jet Fox 97 felt rough on a sandy turf taxiway and runway; rattled significantly. Some vulnerability in the event of an off-field landing due to modest ground clearance.

Cons - Heavier empty weight and higher wing loading make for longer takeoff roll - though landings can be relatively short once you learn to make good use of flaps and slips. Not as strong on short/soft-field takeoffs. Bumpy ride prior to rotation.

Cons - If anything, the rudder may overpower the ailerons (opposite of many designs). No other negatives discovered.

Cons - Speed range is somewhat limited compared to other designs; stall at about 40 ranging to max cruise at 100 is a 2.5 multiple (4:1 is the Holy Grail of design). Doesn't slow well for those who prefer low-over-the-field flying.

Pros - Power-on, power-off, and accelerated stalls were all very benign with no tendency to fall off on a wing. Four-point seat belts on both seats are standard. Emergency ballistic parachute was appreciated. Held steep turns with little pilot input; carved very clean turns. Very hands-off stable.

Cons - Stalls at around 40 mph are higher than very light ultralights. The high-mounted and powerful engine creates the expected pitchover on power-up, opposite of certified designs (though it wasn't radical thanks to a powerful tailplane).

Addresses the questions: "Will a buyer get what he/she expects to buy, and did the designer/builder achieve the chosen goal?"

Pros - Italian sense of finish with beautiful glass work; as sharp as you'll see and very well equipped. The Jet Fox was my 2002 airshow "Pick-of-the-Week" among 14 aircraft flown. Delivers a very nice experience to one or two occupants (as long as they aren't both extremely large).

Cons - Quite costly compared to many American designs (though closer if both equipped this well). No information on kit manual and language differences could make this challenging. No info on delivery times. 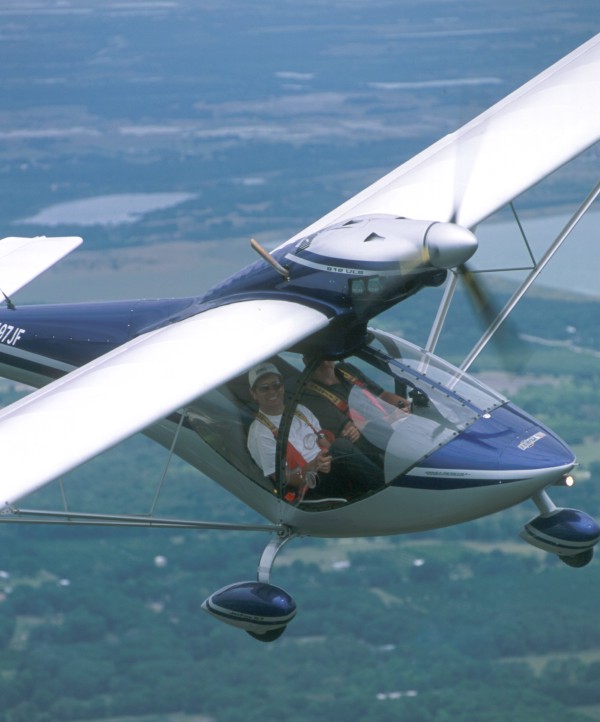 Sleek with curvaceous lines, the Jet Fox 97 commands attention, even when surrounded by other desirable flying machines. Welcome to Italian company Euro ALA and its candidate for the proposed Light-Sport Aircraft category. Sergio Cremonesi, the factory representative with whom I would fly the racing-looking Jet Fox 97, told me the “ALA” stood for Advanced Light Aircraft. Advanced, indeed! I’d seen this machine in France at airshows in ’98 and ’99. I snapped photos of it and wherever I showed those pictures, ultralight pilots smiled with appreciation. In the finest Italian sense (think Ferrari), the Jet Fox 97 has the lines and looks to draw closer inspection. One look inside – all Jet Fox 97s I’ve seen appear to be similarly outfitted – and those smiles morph into grins. The panel looks like something out of a fighter aircraft. A color flat glass display is flanked by the usual assortment of “steam gauges,” installed with engineering precision.