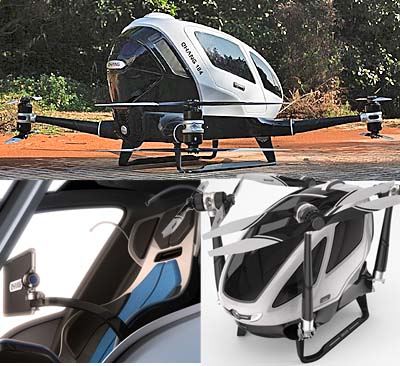 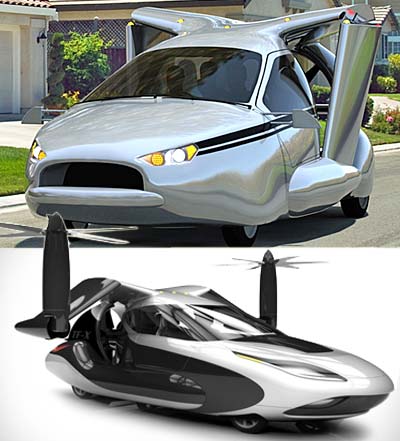 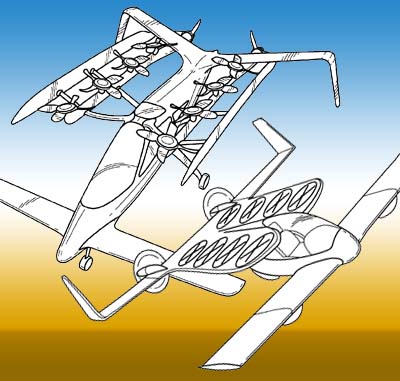 As techies know the giant Consumer Electronics Show (CES) has been in the news over the last week and we’ve seen articles about cool stuff at the event. I don’t remember ever seeing anything about manned aircraft in CES coverage before though quadcopters have had a clear presence. At the 2016 event, though, one vehicle got a lot of attention: eHang 184, from China. You can check out their video below.

I found eHang very intriguing but I hesitate to call it an aircraft, at least compared to manned airplanes. It is more like an autonomous air vehicle and I say that because the occupant is not a pilot. As its developers tell the story, you get in, use the screen in front of you to tap where you want to go and eHang flies you to that destination. I’d be more likely to call it an “aircab.”

As currently portrayed and as seen at CES, eHang is something very different. It is a one person transport device though I imagine they are thinking more seats in the future.

Is it so hard to envision eHang taking you to your doctor appointment or the grocery store?

Yet eHang is entering a field we may shortly call crowded. Let’s have a look at another example, one we know better. On several occasions, I’ve reported about Terrafugia’s Transition The brain trust at Terrafugia worked hard on their flying car even going to the trouble to get a weight exemption so they could meet highway regulations that are as onerous as FAA regs for airplanes. Yet it appears the Massachusetts company has set off a new direction.

Enter TF-X. What’s the difference? A lot, actually, as TF-X is driven like a car, rather conventionally, but only to a runway or helicopter-like pad where you tell the TF-X where to take you. TF-X does the flying for you, autonomously. Do you see a theme emerging?

TF-X unfolds short wings but then deploys electric-powered, folded propellers to achieve an MV-22 Osprey-like take-off that morphs to level flight. Once aloft and moving forward the spinning props retract and a high-horsepower engine pushes TF-X through the air at speeds around 200 mph until near your destination. Then the spinning props redeploy and resume a helicopter function, lowering you to the ground. After folding the empennages into the body again, you drive to your destination.

Like eHang, the TF-X’s “wow factor” is almost off the charts.

Even Transition has would-be competitors as I described in this article or this one. Most of these are dreams that may never happen although I-Tec’s Maverick has been flying for a few years and a limited number of examples were delivered.

I have also written about a China-developed “carcopter.” This is a twist on the Transition flying car, the Maverick dune buggy-ish powered parachute, or SkyRunner’s MK 3.2 “flying ATV.” However, all four of these entries are meant to be flown by someone, by a trained pilot inside the machine. Autonomous air vehicles such as eHang or TF-X (when airborne) are something different.

Of course, by now every knows about Amazon’s ambitious drone delivery plans. That, too, is something yet again.

One we know even less about due to a dark curtain of secrecy surrounding it is the Zee.Aero concept. All I know is what can be found by anyone digging through patent applications. I know one employee of the company but he will not say a word. I also know the founder who created some interesting hang gliders. I don’t know what Zee is planning but based on the drawings it sure looks like a — you guessed it — autonomous air vehicle, perhaps an aircab.

Why write about such non-pilot vehicles on a website frequented by pilots who want to be at the controls? Well, these developments are technologically interesting and they may start to occupy the air we use, just like drones are doing today (though conflicts are vanishingly small, at least so far).

These future of flight developments also make a favorite expression of mine even more relevant. As a Star Trek fan, I have long said that when we can “Beam me up, Scotty” the end will come for transport aircraft. Who’d sit in a crowded human mailing tube if you could beam to your destination? However, flying for fun will always have a place. Airliners may disappear in the far future but LSA, hang gliders, gyrocopters, aerobatic airplanes and other sport or recreational aircraft should continue as long as people want to play in the sky.

Following is eHang’s promotional video with a story that includes development failures. eHang’s time may be off in a distant future but given this level of determination, who knows?

You may have already seen this (it has almost 3 million views) but since Terrafugia is a U.S. company deeply involved with the ASTM standards and the LSA regulation, I include their impressive video.