Our fastest-with-the-mostest partner tracks the health and performance of the light aircraft industry and is once again punctual. Datastician Steve Beste has proven his capabilities to collect the registration data quickly, accurately, and with an insider’s viewpoint. Steve is a trike pilot, so he is “one of us.” In his former life he was a database expert in the tech field explaining his great facility with these systems. 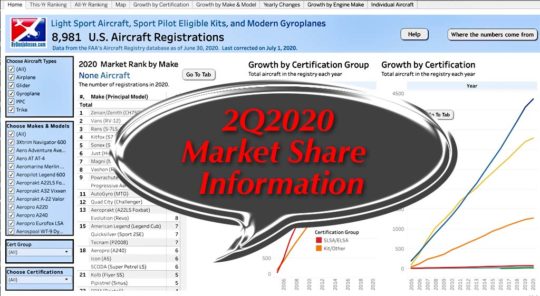 This is the home page from Tableau Public; visit to see much more detail.

Here we are reporting facts for the period of April, May, and June 2020. Given the spectacular upheaval around the world, I’m happy to see the recreational aircraft industry holding its own fairly well. Reporting for the companies making larger, heavier aircraft, the General Aviation Manufacturers Association also reported sales are down. I cannot imagine anyone is surprised.

If I was reporting numbers for the restaurant, bar, hotel, airline, theater, sports, or concert industries it would be an ugly bloodbath. This report is far less glum and beaten-down than those enterprises.

As Steve notes from his study of the current data, “Overall, registrations are down 11% year-to-date from what they were at this time a year ago.” Total registrations declined rom 387 to 344 aircraft of all types. This still speaks to a year with around 700 aircraft registered. 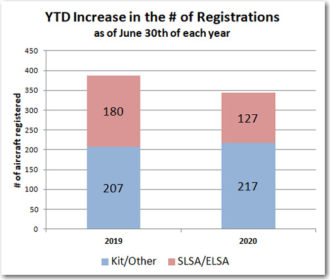 However, Steve further observed, “The decrease is all in ready-to-fly aircraft. Kit registrations have actually increased a bit.”

He continued, “This data is consistent with a [statement] that says that people [may be] buying fewer new aircraft this year, but kit builders are continuing to work on their projects. Indeed, they’re completing slightly more projects than they were last year.” Considering recent events, he added, “This is just what you’d expect for a time of economic downturn and quarantines.”

Looking at the big picture for overall numbers, when comparing the first half of 2020 to the first half of 2019, we see total registrations are down by 11%, almost identical to GAMA’s first quarter 2020 figures. Piston GA aircraft deliveries were down 11.7%; their second quarter info should be out before long and we can wonder if they will take a harder turn south. 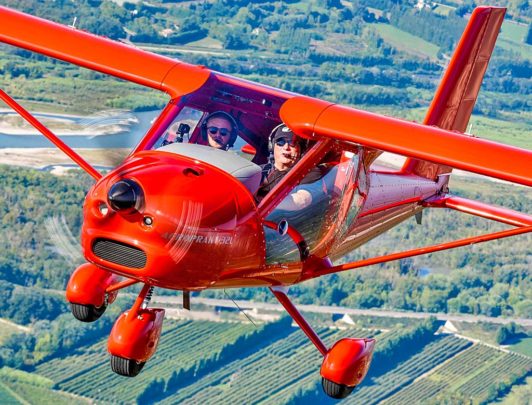 Performing strongly in 2020, Aeroprakt‘s A-33 is seen in-flight. —photo by ATA

However, an interesting aspect to the story is that kit-built light aircraft registrations are up for 2020, from 207 last year to 217, both representing 6-month totals, an increase of 4.8%.

Please remember that registrations — especially for kit-built aircraft — represents completions of kits not sales of kits. The two are displaced by 1-3 years or more of work to take a kit from assembly to flight.

The suffering comes as Light-Sport Aircraft kits and fully built models were down from 180 in last year’s first half compared to 127 this year, a reduction of 29%.

One well-known company heads our list of most-changed …and unfortunately, not for the best. You guessed it: Icon Aircraft and their handsome, if troubled, A5 LSA seaplane. 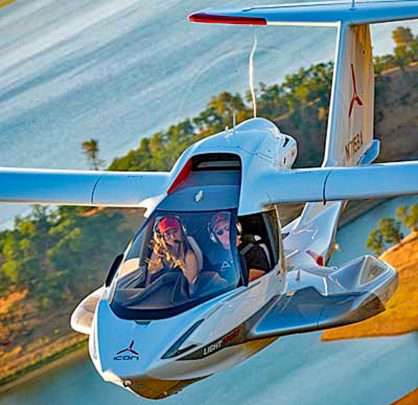 Icon A5 aloft over California. —photo by Icon Aircraft

After two relatively steady years of registering around 50 aircraft a year, enough to rise near the top of the fully-built Special LSA segment, Icon’s 2020 registrations plummeted from 44 in 2019 to 6 so far in 2020. Do please remember that these numbers are for the first half of 2020, a very difficult time, and with any luck, the last half of this weird year may improve.

As if Icon was not facing strong headwinds, it just got more turbulent as Aero News-Net reported. Original founder and visionary, Kirk Hawkins — described by the company as being “on sabbatical leave” — is suing the Chinese company that is the primary stockholder of the California builder with extensive operations in Mexico.

The last Chief Operating Officer has resigned and been replaced by another but the company is struggling to right the ship. Their aircraft is the most expensive, by far, in the LSA industry. They have two large facilities and more than 300 personnel on the payroll (although two thirds are in Mexico where wages are surely much lower than in California). That much overhead and payroll cannot be sustained with a dozen aircraft a year so Icon’s new leader certainly has his work cut out for him.

As Steve discovered, “Icon registrations have dropped off a cliff, from 44 in 2019 to six so far in 2020.” No question this is the biggest change in light aviation prompting Steve to ask, “What is going on there?”

In better news, though, Steve said, “Magni gyroplanes are doing very well. They’ve already exceeded last year’s total (10) by 50% and the year is only half over.” As I’ve written recently Magni is active in promoting their business during this difficult economy and that effort is evidently bringing benefits to the Italian producer. 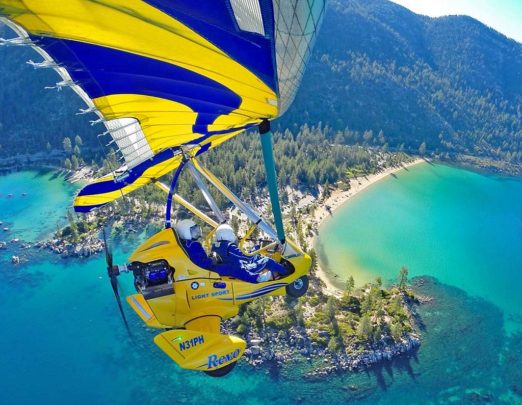 Steve continued, “Likewise, Aeroprakt has gone from 3 last year to 8 already this year.” If Aeroprakt USA importer Dennis Long can keep up this pace, he’ll hit 16 aircraft for the year, which is a worthy performance.

In our full-year 2019 report, Evolution Trikes looked rather weak but boss Larry Mednick reported that some registrations that should have made it into 2019 didn’t and we assured him they would show up in our 2020 reporting. They did, as Steve stated, “Evolution Trikes are back, going from 3 in 2019 to 8 in the first half of 2020. Like Aeroprakt, this suggests they are back on track …or alternatively, the database figures confirm Larry’s comment at the end of last year.

Please remember, as always, registration data is not sales data. For one obvious example, Evolution sells trikes outside the USA and these are not counted in this report. 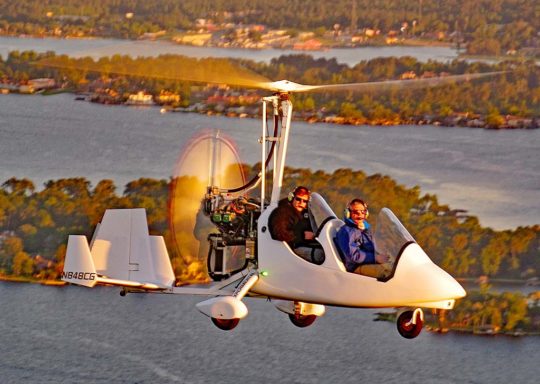 This beautifully-lighted image of a Magni M16 tandem gyroplane was taken on a flight from Texas to Cuba (here’s the whole story).

Combing the database thoroughly, Steve added a closing thought: “Looking elsewhere, I see that among gyroplanes, the enclosed side-by-side models are [now] favored over the tandem and open models, that is, AutoGyro‘s Cavalon is their top model, as is the M-24 Orion for Magni.

Thanks a million to Steve Beste and his efforts to keep us all informed. Please go visit Tableau Public for much more information, which you can shape and change at will — see the blue boxes at the left of your screen, especially the bottom two that may be most helpful, plus the tabs across the top.