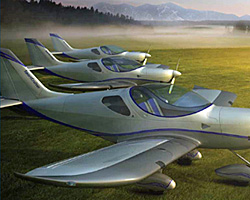 A new day dawns (again) over the SportCruiser, until recently known as the PiperSport. photo courtesy Czech Sport Aircraft

SportCruiser reassumes its former name and loses the Piper logo on the side of the aircraft. photo courtesy Czech Sport Aircraft

First off, a correction: Though I took the proposed renaming of PiperSport to “SuperCruiser” directly from a Czech Sport Aircraft (CSA) news release, the new name did not stick. It’ll be the SportCruiser as it was before Piper assumed worldwide distribution. *** Widely reported in aviation media, Piper abruptly ended their almost-year-long relationship with manufacturer CSA in what appears to be a dispute between the two investment companies that own both CSA (Slavia Capital) and Piper (Imprimis). Following Piper’s termination news release, CSA announced that they sought more worldwide sales and felt Piper was too focused on America. *** Whatever the true tale, the popular aircraft will have continued support in the United States thanks to Florida based U.S. Sport Aircraft. USSA was the importer since 2008 and remained involved through the Piper era. Company president Don Ayres stated, “Under the name PiperSport, the SportCruiser was the LSA sales leader in the United States, with a total of 45 units delivered to customers in the last 6 months of 2010.” Don added, “Every PiperSport sold in the US was imported, licensed, registered and sold through US Sport Aircraft and a dealer network, under a distributorship agreement with PiperSport Distribution, Inc. Continued airworthiness support, parts, warranty and technical information for the airplane has always been, and will continue to be, through US Sport Aircraft, its dealer network and CSA. Truly, nothing has changed except for the name on the side of the plane.” *** Speaking on behalf of CSA, Martin Zikes reported, “The factory is immediately shipping a complete inventory of parts to America, so both PiperSport and SportCruiser owners can be assured of continuing parts and warranty support.” The Czech company, which took over ownership from founder Chip Erwin and his Czech Aircraft Works, reports 500 aircraft flying in 24 countries. *** Indeed, as Piper lead in FAA registrations for 2010 and added to the SportCruisers delivered earlier, the model recently dislodged American Legend as the number two ranked company for total LSA fleet size in the USA. Those 161 registered owners of SportCruisers or PiperSports should enjoy good support going forward.