When I was a kid, I was a New York Yankees baseball fan. Why? I’d never been to New York; I lived in the midwest. I loved the baseball team because they won a lot. The saying way back then was, “The American League battle isn’t to determine who wins, but which team might come in second.” Everybody knew the Yankees would win again. (As I said, this was some time back in history.) 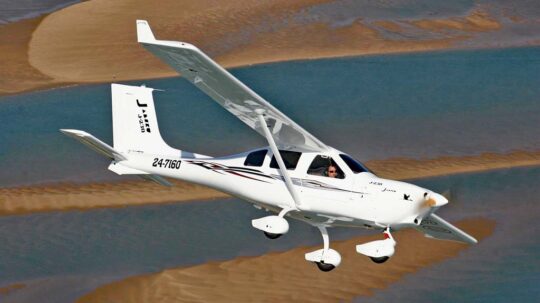 In light aviation, we have a roughly similar situation. Rotax provides somewhere around 70-80% of all engines for aircraft in the light aircraft space globally. The remaining 20-30% is divided between Continental or Titan, Jabiru, ULPower, and a growing collection of converted auto engines (though the latter, without ASTM approval, are used only on kit aircraft or ELSAs).

US Sport Planes owner Scott Severen, who represents Jabiru in America, declared for the Australian manufacturer, “The 4,000th Jabiru 2200 four-cylinder, 81-horsepower engine [was] recently produced at the Jabiru facility.” And, he added, “The 3300 engine [series is] fast approaching this number, too.” 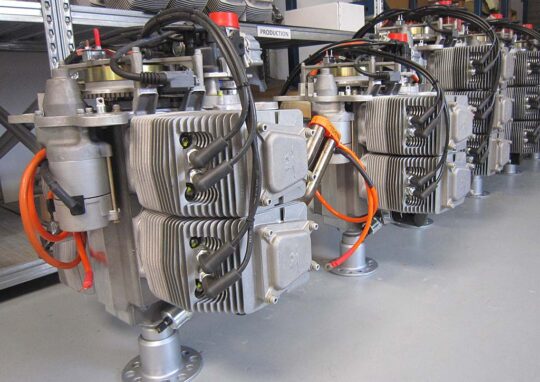 So, Jabiru may not be #1, but the “down-under” company achieved a significant benchmark when they shipped number 4,000 of the 2200 series. Jabiru’s 3300 six-cylinder 120-horsepower model is well past 3,000 engines shipped. Therefore, almost 8,000 airplane owners are carried into the sky by Jabiru. Contrasted to the entire American LSA, ELSA, Sport Pilot kit-built aircraft fleet of almost 10,000 aircraft (see whole list), Jabiru appears to be doing quite well. 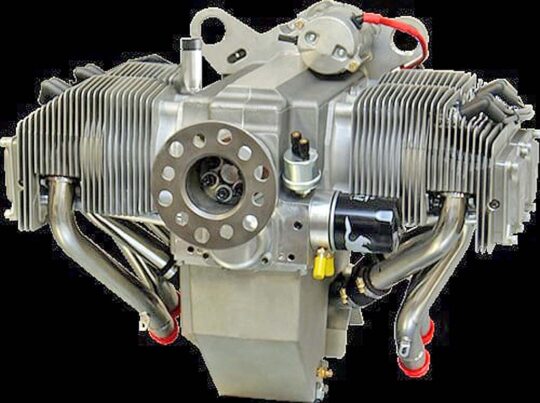 While the four cylinder model passes a major benchmark, the company recalled, “The 2200 engine started production a few years earlier than the 3300 engine so it will be awhile before the 3300s catch up to the numbers of 2200 engines but they are gaining on them.”

While I congratulate Jabiru on their achievement in building engines, I took extra time to research the state of all engines in the Light-Sport Aircraft field — and this won’t even count developments like turbine, though it is beginning to show the presence of some electric-powered aircraft. 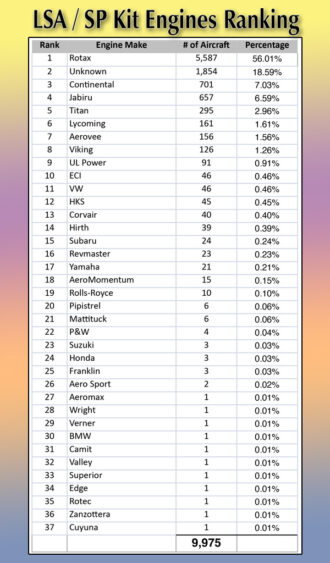 The information in the table was created from work by our datastician extraordinaire, Steve Beste (article), who often adds some observations I find valuable. See this page about Steve and others who help this website.

So, Rotax dominates. Well, you knew that, right? In fact, Rotax’s presence around the world, outside the United States, is even stronger, probably closer to 70-80%. The big Austrian engine manufacturer works with more than 200 OEMs (original equipment manufacturers, meaning airframe builders) in nearly every country on Earth.

Many countries do not allow homebuilt aircraft and that’s unfortunate because such aircraft provide fertile ground for a new engine producer to get started. Perhaps this explains why the USA has so many different engines in our list.

For those of you who want to plow down to every single engine on every single Light-Sport Aircraft or Sport Pilot-eligible kit-built aircraft, check this long PDF file to see every entry in our comprehensive database. Learn more beyond engines from our Tableau Public market info page. 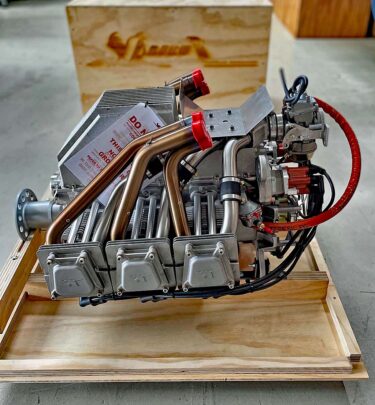 If you are puzzled, as I was, by the #2-ranked Unknown listing, here is Steve’s response: “The ‘Unknown’ refers to aircraft where the FAA data is blank in respect to the engine. Presumably, these aircraft have engines, but the FAA doesn’t know what kind. This is a data-quality problem common to all databases. No database of any size ever has perfectly clean and complete data, contrary to what people assume.”

“I was surprised to find ‘Pipistrel’ engines,” Steve also wrote. Pipistrel makes airframes and then installs Rotax or other engines into them, don’t they? Well, yes, that’s been most of their history. Yet in recent years Pipistrel has engaged deeply in electric-powered aircraft and this data has begun to creep into our comprehensive review. (Choosing to pursue electric power appears to have been a shrewd move as Textron paid a boatload of money [more than $200 million, it has been reported!] to acquire the Slovenian company, allegedly mainly for its pioneering work in electric propulsion.) 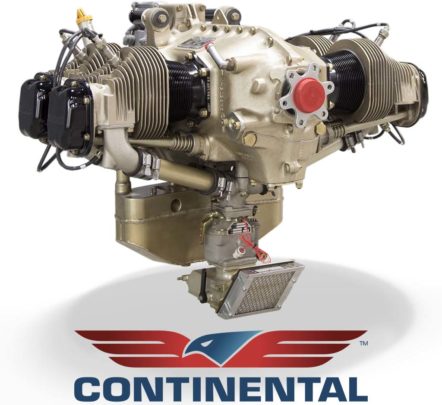 “These Pipistrel powerplant entries are for electric-powered aircraft as the All-Engines spreadsheet shows, so by all means we want to credit Pipistrel,” Steve clarified.

Then Steve noted, “I was shocked to see that we have ten ‘Rolls-Royce’ engines! I thought it was bad data. Turns out, it’s a bunch of CarbonCubs that use a Rolls-Royce-licensed version of the Continental O-200.

Steve continued writing, “One website reported: ‘In a cooperative venture, Rolls-Royce produced these same designs in England, under separate certification, with model designations beginning RR, e.g., the Rolls-Royce RR C90-12FH is the equivalent of the Continental C90-12FH.'”

The Rolls-Royce versions were said to be “directly interchangeable with the equivalent models manufactured by Continental.”

Dig further if you wish. It’s all here to read as this article uncovers the breadth of the light aircraft powerplant market.