You’ve heard some pilot say: “That airplane is so sleek it looks fast even when sitting parked on the ramp.” This is one of those airplanes. 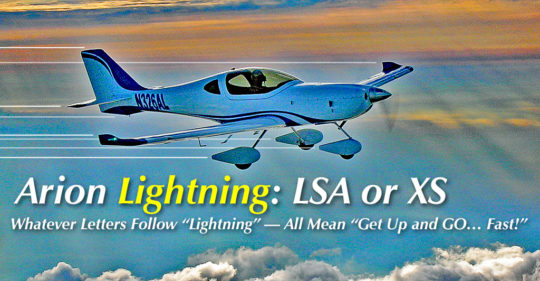 While most light aircraft producers concentrate on either kits or fully-built, a few swing both ways. Some builders unwilling to experiment with two very distinct business models permitted others to contract build a fully-built version while they focus entirely on kit building. Few have managed to do well with both endeavors but Arion seems to have solved the challenges.

Arguably the shapeliest and smoothest aircraft in either the kit or RTF space is Arion Aircraft’s Lightning series. Nearly everyone agrees these qualify as fast-when-sitting-still types. Even one of the many electric airplane wannabe producers, Bye Aerospace, chose Lightning as its airframe template because they needed the smoothest, most modern look they could find.

Look No Further
A Flash of Lightning

Of course, fast glass will never replace gnarly back-country airplanes on giant tundra tires. If you like that sort of operation, you’re lucky to have many choices. 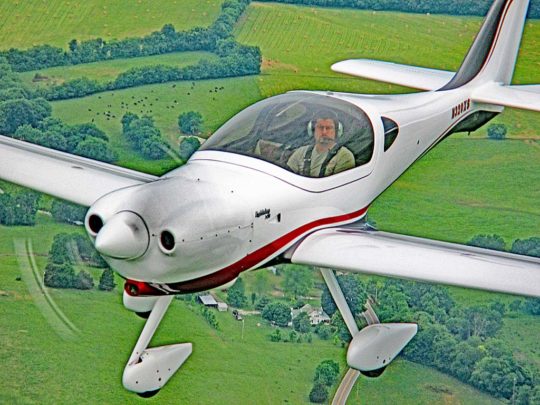 Yet aviation’s leading draw may be going fast as more is always better, right?

Indeed, one reason Arion makes a kit as well as their LS-1 Light-Sport model is because then they can access the excellent speed potential of this slick design.

Let the drooling begin over these beautifully-contoured flying machines that can race 135 to 190 miles an hour for a fairly modest investment.

Arion’s LS-1 is a complying Light-Sport Aircraft that meets all the parameters and succeeded in passing a detailed FAA audit with flying colors a few years back.

Lightning XS is the Experimental model on which you can install a more powerful engine.

That these handsome aircraft are also 100% designed and manufactured in the USA may be sweet icing on the cake for many readers.

Lightning LS-1 is an all-composite design paired with metal hardware elements. All components are made in house by Arion’s experienced staff. More than 100 Lightnings are flying American skies. The company reported 160 Lightning models are flying world wide dating back to Lightning’s first flight on March 3, 2006. 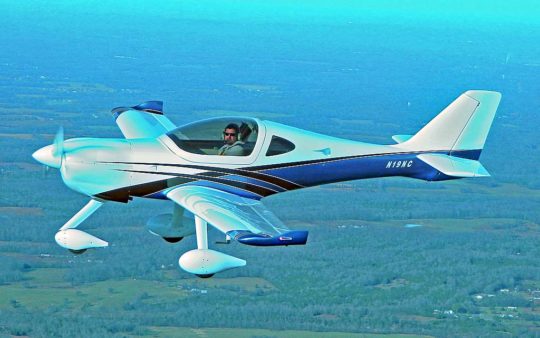 “Lightning LS-1 is designed and built around Jabiru’s powerful 3300 six-cylinder aircraft engine,” noted Arion. “With a displacement of over 200 cubic inches and a direct drive crank, this compact beauty outputs 120 horsepower to deliver performance rarely matched in a Light-Sport Aircraft.” Lightning has no trouble hitting the LSA speed limit of 120 knots (138 mph).

“[However, we] spent more than three years making the kit Lightning as efficient and fast as we could, so slowing down to 120 knots was a complete reversal of our thinking but one that had its benefits,” said principal and designer, Nick Otterback. “By changing the airfoil slightly and adding three feet of wing span, LS-1 stalls below 44 knots clean, giving our aircraft an impressive 52-knot approach speed.” 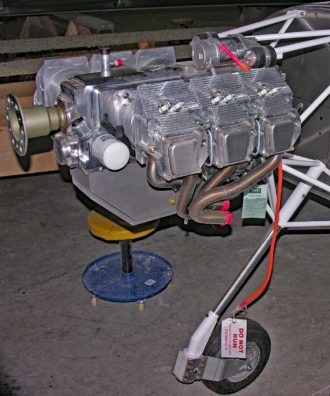 A Jabiru 3300 delivers solo climb in excess of 1,200 fpm and owners can expect 1,000 fpm at its 1,320 pounds gross weight. At cruise speeds of 120 knots, the Jabiru burns a miserly 5.5 gallons an hour. “These are real performance numbers a pilot can rely on; not on a perfect day at sea level or flying around solo, but all loaded up,” stated Nick.

Most companies list useful load, but Arion said the more meaningful payload can be up to 470 pounds. That will allow two big Americans plus some luggage, assuming weight and balance concurs. “Now standard equipped with 40 gallons of fuel, a Lightning pilot can go over 800 nautical miles with VFR reserves,” Nick added.

Lightning XS is sold in kit form. The taller XS with more ground clearance offers a redesigned forward fuselage structure that gives the builder the option to choose engines up to 180 horsepower.

Landing gear offering higher ground clearance permits bigger props on this new kit to allow the speedier model to hit speeds of 160 knots (184 mph) or more. Firewall aft, XS is much the same as the classic Lightning including its 42-inch wide cabin. 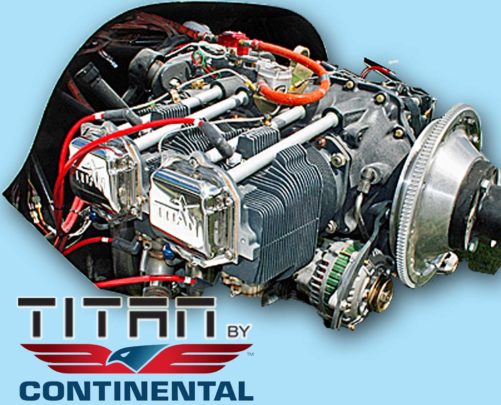 Learn more about Titan directly from the source in the video at the bottom of this page.

Arion offers several propeller choices for the engines above. “For fixed pitch we like Sensenich wood or composite ground adjustable props,” said Arion. “We have tested in-flight adjustable props as well. For the Titan or Lycoming types, Whirlwind Aviation makes the RV200 series lightweight constant speed prop. For Jabiru or UL Power we have tested the Airmaster series.” Installation of an in-flight adjustable prop can increase performance but, of course, builders must accept added expense and plan for extra weight on the nose as they work through the build process.

For those unsure about building a kit, you can always choose the LSA model and pick it up ready to fly. If you want to speed up the assembly process, Arion offers a builder assist center at their Shelbyville, Tennessee facility about an hour south of Nashville. Lightning owners in the western USA can try this deluxe Arizona builder-help center. Here’s one owner’s experience building Lightning at that center.

Some pilots (me, for instance) thoroughly enjoy the beauty of flying slowly, of drifting leisurely over the landscape at a “human speed” that allows enough time to enjoy the expanse of an aerial view of your surroundings. 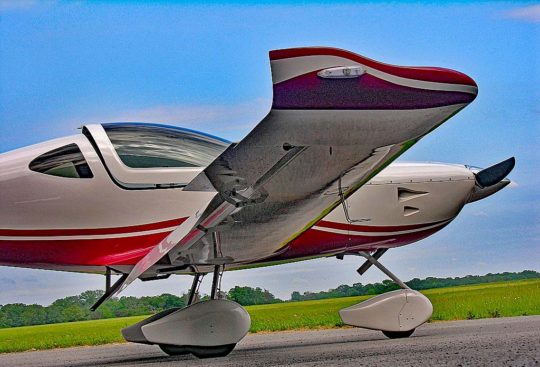 Yet the allure of going fast is great, quickly chewing up the miles en route to your destination. When contemplating a cross country trip of a lengthy distance, fast cannot be too fast. In addition to a higher TAS, we all yearn for a tailwind that will raise our ground speed by another 20 mph.

Lightning with the big Titan engine required a bulging nose cowl, Nick said. Taller landing gear for bigger props, bigger brakes, and 40 gallon fuel tanks are also among some of the features of this kit.

How fast does Lightning XS go? Early testing revealed max cruise at 165 knots (190 mph) TAS at 8,500 feet density altitude at full gross. Climb is a stunning 2,000 fpm. These figures may sound boastful but but reflect real-time experience as recorded by the no-nonsense Nick Otterback. 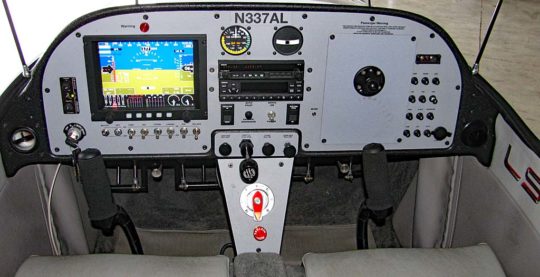 Most buyers may elect more than the basics but the fully-built Light-Sport Aircraft version of Lightning, called LS-1, is base priced at the genuine bargain of $115,000. Yet if you have time, the interest, and enjoy constructing a kit, Lightning XS has a base kit price of $39,900 with the Titan firewall-forward kit. A builder assist program is available for $4,000 extra. The program lasts four weeks.

Of course Lightning XS is not a Light-Sport Aircraft and will require a Private or better certificate plus a medical, though BasicMed will suffice. If you don’t want to acquire a current medical, you can choose the SLSA version.

Choices are good and Arion delivers sparkling performance with dashing good looks regardless of which variation you prefer.

Listen to developer Nick Otterback tell you lots about the superspeeder Lightning XS with 180 horsepower.

A second video goes into depth about the Titan line of engines. 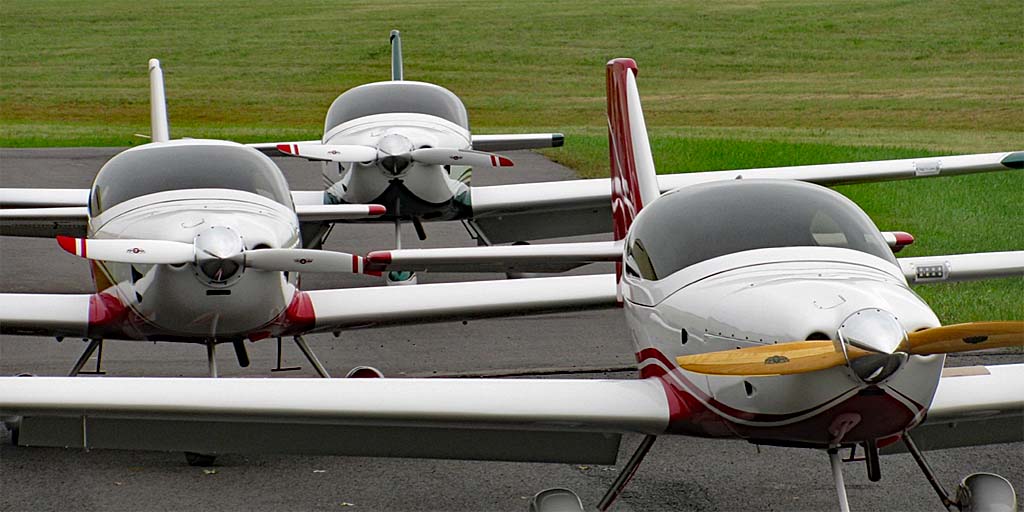 Nearly 200 Lightning models are flying around the globe since the line was introduced in 2006.