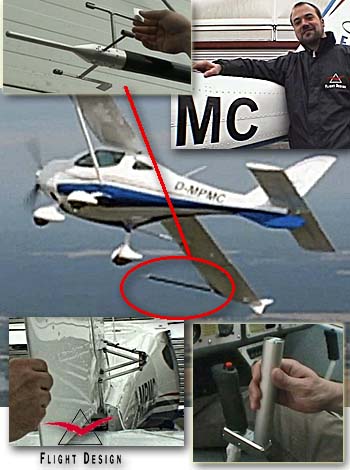 Much has been written about Cessna’s Skycatcher incidents, those spin investigations that caused the loss of one airplane and a parachute deployment from another. Of course, the giant producer knows well the design of light aircraft so it was only a matter of time before all problems were solved. In doing these spin tests, Cessna said they went beyond the ASTM standards, which also call for spin evaluation. (That’s fine. ASTM specifications are intended to be minimum standards; going beyond them is the decision of each company.) *** A new video from Flight Design does a professional job of showing viewers around the aircraft and its test equipment. Check out the YouTube version. Produced by Flight Design test pilot Tim-Peter Voss and his brother Ben, the videographer, we learn that the process no longer depends on a test pilot manually recording results because electronic devices measure more accurately and in real time. After downloading the data from a flash drive to a laptop, engineers evaluate the results. While the facts and explanation are interesting, the video also takes us through a few maneuvers. *** Some folks believe ASTM standards are simplistic specifications to certify an aircraft. But that shortchanges those industry consensus requirements. As the draft author of the standard for airframe parachutes I can assure you that ASTM requirements go beyond FAA’s Special Conditions for installing a ‘chute on Type Certified aircraft. Get more info on ASTM standards.