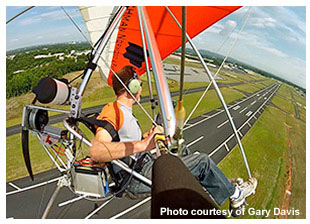 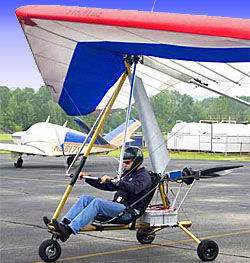 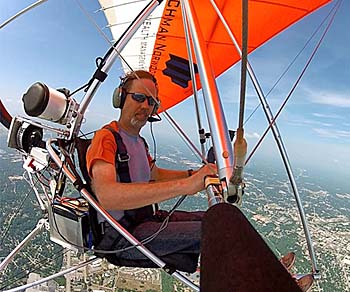 On his way to nearly 5,000 feet AGL, Gary Davis managed to set a record for electric aircraft. photo by Gary Davis

On Saturday, June 21 with a good crowd watching, an electric-powered trike took off and climbed into the FAI record book, or will after the organization’s normal process is followed. Let me state right up front that this story was recently released on AOPA’s ePilot written by our journalist friend Jim Moore. Despite appearing in the big member organization’s eNewsletter, the story was too cool for me to pass up for ByDanJohnson.com plus, as usual, I have an additional perspective to offer. The images are all courtesy of record-holder-to-be, Gary Davis. If you click the link above you can read Jim’s whole article; I encourage you to do so.

As Jim wrote Gary flipped the switch and flew, “a custom combination of a North Wing Stratus trike wing matched to an electric-powered trike frame designed by Randall Fishman.” We have a number of articles and videos about Randall’s pioneering work. He is arguably THE originator of practical electric powered airplanes, meaning that you can today buy and start flying your own electric airplane. You do not have to wait years for this opportunity. You can do it now! That’s cool. For those on a budget or for those of us who like weight shift, a trike similar to Gary Davis’ is available for around $20,000 ready-to-fly and that includes the wheeled trike carriage, electric power system, wing, battery pack, and a customized battery charger. Because it’s electric, the purchase price essentially represents several years of buying gasoline and oil making it an especially affordable expense. For those who want higher performance from a smooth, slick rig with three axis control you can choose Randall’s beautiful ULS, featured in this video, which sells for around $60,000. You can get more details about the airplanes Randall sells at his Electric Aircraft Corporation website.

Gary Davis took his electric trike to nearly 4,700 feet, a number substantial enough to earn a record … eventually. Jim wrote, “NAA staff said it will take roughly 60 days to verify the data captured by the sensitive barometric pressure recorder on board, and calibrate it with readings taken at ground level to confirm a maximum altitude of roughly 4,660 feet. Once the national record is established, it will be forwarded to the Fédération Aéronautique Internationale for ratification as a world record, a process likely to require months more.” Davis flew until he exhausted the batteries or about a half hour of high power output. Randall would say that the battery pack can provide more flying time if you weren’t at full “throttle” all the time. I experienced something similar in the eSpyder. Congratulations to Gary! Like me, he’s a hang glider pilot so while he surely enjoyed the whole exercise and the applause of those watching as he touched down, the flight down without power was likely also satisfying.

Let me end this happy little tale with another nod to Jim Moore. Filling his role as a journalist for the big AOPA member organization I find his writing creative and entertaining. He’s shown a willingness to cover the light end of aviation for AOPA, which is appreciated. So, for this story and his positive attitude, I want to offer a large THANKS! to Jim.