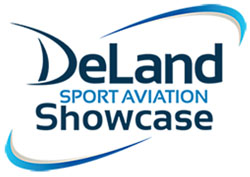 “The DeLand Sport Aviation Showcase (DSAS), conducted from November 14-16, 2019 at the DeLand Municipal Airport in Florida, has completed a careful look at ticket sales, gate receipts, exhibitor numbers and other data… and is happy to report that the 2019 Showcase eclipsed the 2018 attendance by over 20%,” reported lead organizer, Jana Filip.

“Sport aviation is alive and well… and the truly dedicated flyers out there simply would not let some clouds and sporadic rain keep them from seeing and sharing in all that was new and interesting in the sport aviation universe,” explained Jana.

At the fourth running of Deland Showcase, organizers boasted 26 companies new to the event. They had earlier reported a sold-out exhibitor slate. Jana will study attendee and exhibitor reports and will then confirm dates for the 2020 edition of the DeLand Showcase. A decision is expected shortly.

“Designed in France. Assembled in the USA.” Hmmm, sounds rather like a certain product “Designed in California, Assembled in China” from a famous brand. The high-tech French prop maker established a base in the USA where they provide full support and service for the growing line of propellers for Light-Sport Aircraft and Sport Pilot kits. 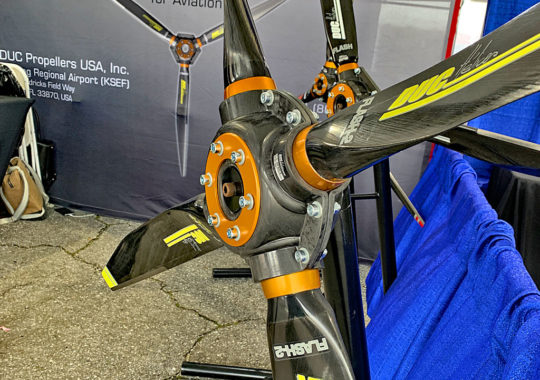 “This is a four-blade, ground-adjustable prop developed expressly for the Rotax 915iS,” said Gaetan Fouozing, Duc’s new representative at their Sebring facility serving North America. Readers may recall the newest, most powerful engine from Rotax has only been available with props that can be adjusted in-flight. However, at AirVenture Oshkosh 2019, the Austrian company announced they would begin supplying the 915iS for fixed pitch props in fall 2019. Read more about Rotax 915iS here.

Gaetan said Duc engineers studied three and four blade combinations but settled on four blades to make use of the added power delivered by 915iS (up 40% from the Rotax 912iS). He confirmed the Flash 2 4-blade product is in stock at this time. “All Duc products are held in stock at our Sebring facility,” Gaetan observed.

In addition to the ground adjustable capability, Duc said their new Flash 2 is “available in Hydro version for seaplanes.” The French prop manufacturer said the hydro version offers high water resistance and abrasion by adding an Inconel metal leading edge 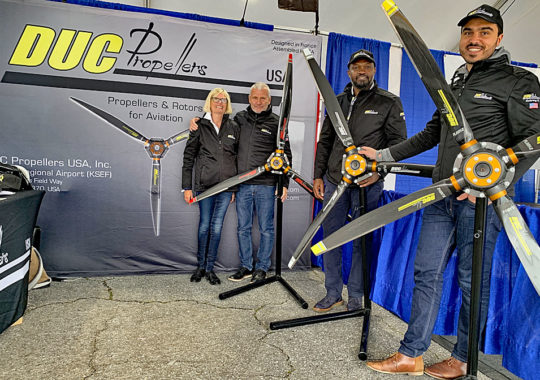 Priced at $4,589.50, Flash 2 four blade is fairly precious but it is designed to manage the power of the also more costly Rotax 915iS engine that outputs 141 horsepower. As the time-honored race car saying goes, “Speed costs money. How fast do you want to go?”

Engines are sometimes said to the be primary component that has driven aircraft development over the decades but engines demand propellers that can transmit engine power to moving an aircraft through the air. The folks at Duc continue to apply their expertise to this essential product.