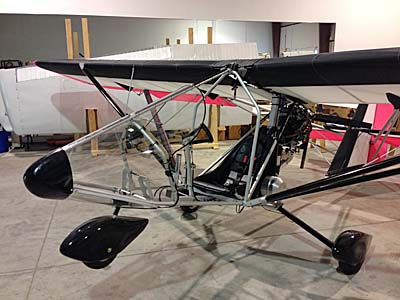 Some people have long believed that Part 103-legal weight shift trikes or single place powered parachutes may be possible but I’ve often heard the pronouncement, “You cannot make a legal three axis Part 103 airplane.” I wonder if those folks are ready to admit their error?

Those attending the 2015 Sebring Expo will want to examine the new Aerolite 103 with a Briggs and Stratton four stoke, all freshly mounted and looking better than ever. That you can fly such an airplane without a pilot’s license or medical, without N-number registrations, and buy one ready-to-fly for an affordable price amazes more than a few pilots. However, mostly those machines — a few have been available for some time — use two stroke engines in order to stay within the very confining 254 pounds of empty weight. If you don’t care for two stroke power …Wait no more! 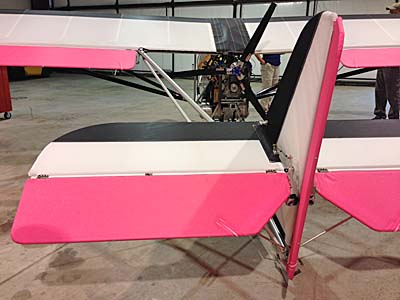 You might remember seeing such a machine at Sun ‘n Fun 2014. Developer/manufacturer U-Fly-It was indeed displaying such a model but proprietor Dennis Carley didn’t feel it was ready for sale at the time. His appropriate caution caused some to again conclude that it simply wasn’t possible. In version 2.0 (photos) Dennis indicated he has now gotten the machine flying much better.

Most obvious is the great clean up that occurred by moving the engine from on top of the wing (see bottom photo) to below the wing’s upper surface. The four stroke engine is still mounted upright. Less obvious is that Aerolite 103 with a four stroke engine can still make the low empty weight of Part 103 to enjoy the benefits of less federal interference in your flying fun. 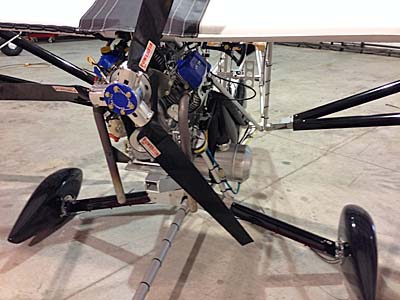 At only 22 pounds more than the Hirth F33 he often supplies but in the new lower drag position, Dennis reports a very acceptable climb rate of 600 fpm from the 22 horsepower the B&S engine. Speeds will be 50-60 mph, Dennis said, making an easy and economical cruise in the four stroke Aerolite. In addition, he said that even with straight pipes the exhaust noise is modest but he plans to add some silencing.

One big question: Can a four stroke Aerolite still make Part 103? “Yes,” said Dennis, although he noted that you cannot have the strut fairings or gear leg fairings seen in the nearby photos. A parachute will also be required.

In case you’re wondering if a so-called “lawn mower” engine can do the job of powering an aircraft, Dennis replied, “Well, when is the last time your lawn mower conked out or you had trouble starting it?” Indeed, much as Rotax has taken heat for being a “snow mobile engine,” many don’t see the problem? The reliability of the B&S engine is not the problem some may envision and you get a much lower noise signature. I look forward to trying this combination, having already become a fan of the Aerolite 103’s flight qualities. 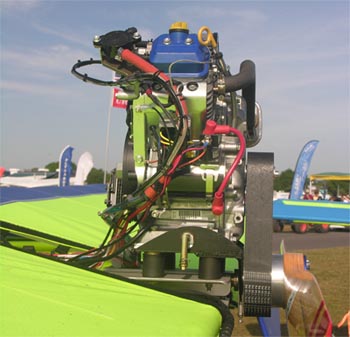 Prices have not yet been established for the Briggs & Stratton. Certainly some costs have increased but since ready-to-fly Aerolites with a Kawasaki 340 start at $15,900, it seems likely you might be able to buy a fully-built aircraft for somewhere around $20,000 and I think that is a very notable fact. Those who say new aircraft are too expensive must consider Aerolite.

Others have been signing on fast. U-Fly-It just took an eight-unit order from their German dealer Vierwerk, sold three more to Russia and processed a few fresh orders from American customers as December 2014 drew to a close. The just concluded year was an excellent one for U-Fly-It with some 40 sales logged. Dennis forecasts 2015 may record 60 sales. So, who says modestly priced, single place aircraft don’t sell? If you’ve been one of the naysayers, I recommend you adjust your thinking.

Given the success of Aerolite in the USA and increasingly abroad, I predict the four stroke Briggs and Stratton Aerolite 103 will become a best seller for U-Fly-It. You better come to Sebring and check it out for yourself!

HAPPY NEW YEAR to you and yours!