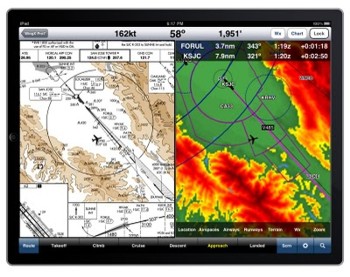 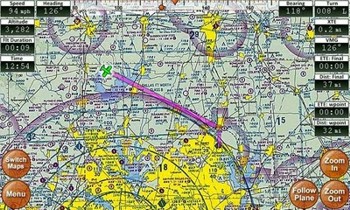 Yesterday in our Ultraflight Radio interview Jim Sweeney and I compared and contrasted two red-hot digital instruments for the cockpit: the Adventure Pilot iFly 700 and the Apple iPad with its tons of aviation apps; see my earlier post on the Zlin iCub. *** To learn more about these two amazing digital toys I also swapped emails with Walter Boyd of Adventure Pilot, who created and does all the incredible programming for the iFly 700. *** Full Disclosure: I just bought an iFly 700 yesterday — couldn’t deny myself any longer! *** First, the iPad, (projected to sell at least 6 million units by year’s end — over 3 mil already!), offers much more than a GPS moving map. As Walter acknowledges, it’s a portable computer optimized for viewing rather than producing information, as on a laptop or netbook. *** Next, it’s big: a 9.7 inch diagonal, beautiful bright screen. And also a bit heavy at 1.5 or 1.6 pounds (3G model). *** Other iPad features: a headphone jack but that’s it for external device connections. connects via cell or wireless to the internet. runs a zillion aviation apps — some free, some $99 or more; some with pricey yearly subscriptions; internal battery powers it for up to 10 hours. $499 to $829 depending on configuration *** iFly 700 features: has USB and MCX (external antenna) connectors for future upgrades to external devices is a non-FAA certified navigation “aid” with incredible interactivity: touch-screen point-to-point flight planning, airport information, TFRs, airspace info and AIM airport info. plugs into aircraft cigarette lighter or other cockpit power source, or accepts auxiliary battery power for up to 4 or more hours run time. requires a $69/year subscription for frequent updates, which includes ALL U.S. sectional charts including Alaska and Hawaii and also IFR charts. costs $499 including case and mounting aids. *** Clearly, these are two very different animals that intersect at the GPS moving map functionality crossroads. *** Which is right for you? Depends on whether you want the galaxy of fun apps that come with the iPad, or the iFly 700, a simpler, highly intuitive, powerful, extremely easy-to-use navigation aid. *** More details: *** Some of iPad’s apps such as WingX Pro7 offer heaps of information but require annual subscription — in this case, $99/year. To get sectional charts you need another app, ForeFlight Charts, for $10/year, but it’s only charts. *** The iFly 700 allows “one-stop” navigating: Flight planning, route changes, airport info, nearest airport and more features are a fingertip touch away. And info displays right on top of the sectional chart. It’s very cool, very easy to use, and just crammed with about any aviation data you could want. *** “The iFly 700 is dedicated as an aviation GPS,” Walter Boyd told me. “Folks buy it for the simplicity of it. They don’t want to search for and install software. They don’t want to wonder whether a problem is hardware vs. software, and who should they call for a fix.” *** The biggest difference between the two units is how each downloads information. “The iPad uses assisted GPS,” Walter continues, “which relies on cell phone towers for initial location, which can take longer. If you lose the signal lock in flight, it may have a very tough time reacquiring the signal. Also, I don’t think there’s an option for an external GPS antenna so some cockpits will have GPS lock problems with the iPad.” *** “Native GPS devices traditionally are smarter at finding their location. It’s rather amazing: signals from the satellites don’t go through anything that’s visible, even a sheet of paper! They bounce around off buildings, roads, trees. Sometimes units receive echoes or inverted signals… and yet it all works somehow. It does explain why GPS sometimes has trouble locking on some days but not others. Ripples in the ionosphere can affect that, too.” *** For those difficult situations, an external antenna can be put in the ideal location, but I don’t believe you can do with the iPad, as it doesn’t have a USB port.” *** The big question I have, and I’m still looking for more information on this subject, revolves around the GPS legality issue. “FCC requires airborne cell devices like iPad to disable 3G transceivers by switching to ‘airplane mode.’ Acquiring signals from the air can set off cell towers for miles around, which puts an enormous drag on the wireless grid. That’s why FCC doesn’t want cell phones powered up in the air, and you can get fined for it.” *** “Also, the iPad is big, and not an easy fit into every panel. We chose a 7-inch screen as the best balance of size and readability.” *** For the iFly 700 (excellent FAQ), tap-in power isn’t always reliable or available in aircraft. Many users (including me) buy auxiliary battery packs which power the unit for a few to several hours. That brings the overall weight into the same range as the battery-inclusive iPad, so call that one a push, although the battery can be stored elsewhere in the cockpit. *** There’s so much more to say about these two devices, I could write a book on it… which would be obsolete before it hit the printers as the tech is evolving rapidly. *** Certainly the iPad with its 225,000 apps has tremendous appeal for aviators and gadget lovers alike. *** Colin Summers has a Top 20 iPad Apps article in the September 2010 issue of Plane & Pilot you’ll want to read to clue you in to iPad’s aviating chops. *** iFly 700 takes the other route: it’s more conveniently sized, simpler, focused on its mission and highly capable at it, and expandable in ways the iPad may never be, such as being able to offer XM satellite weather and ADS-B (essentially a new technology in development that will be a low-cost, enhanced version of radar.) *** Upgrades due out next month include north-up or track-up orientation. *** One thing to remember… neither of these devices are certified by FAA for GPS navigation. Consider them “advisory” and as with any electronic device, make sure you’ve got analog instrumentation backup, a spare GPS, and/or a good old current sectional, just in case.