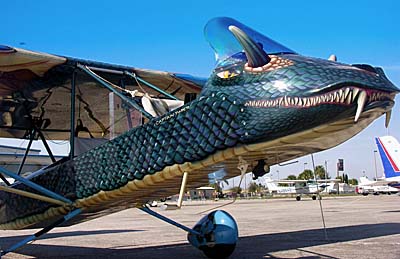 This attention-getting “dragon” Air Cam is not Ron Owens’ but it might qualify as “gnarly.” As the next photo shows, this was a total treatment.

This Air Cam may have demanding duties in remote areas, but that doesn’t mean the paint job has to be dull. 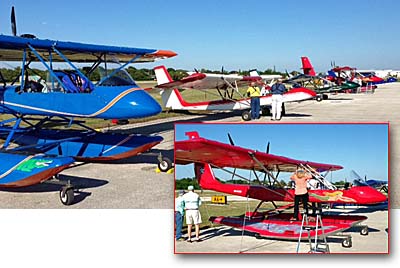 What would you like for a Christmas present, perhaps if you won big in a lottery? Well, you’re a pilot so I might guess that some airplane has caught your fancy. Me, too. Like most pilots a number of desirable airplanes catch my eye but also like most pilots, I cannot afford to have one of each that appeals to me. High on my list of wished-for airplanes is Lockwood Aircraft‘s Air Cam. I have quite a few hours flying one example or another. I even earned my multiengine rating in one, as part of an article I wrote years ago.

As part of the required hours of training to take the flight check — no written test is involved for a multiengine rating — I engaged an old friend and multiengine instructor, Richard Johnson. An Air Cam owner, Sebring dentist Ron Owen, graciously supplied his Air Cam. Richard and I flew all over central Florida in Ron’s plane as I accumulated hours and experience.

Richard and I crisscrossed the state at about 50 feet above ground level, often even lower. We flew over long stretches of orange groves barely 10 feet above the tree tops. Being a safety conscious pilot I cannot imagine doing that in, well … any other airplane I’ve flown, Light-Sport, ultralight, or general aviation. When Richard and I approached an airport to do some multiengine preparation — to simulate an engine out on takeoff, for example — we had to climb. Yes, climb! After flying around at 50 feet AGL or less, you have to climb to enter the traffic pattern so you can land. Richard joked that we had to ascend to “nose bleed altitude.”

The online Urban Dictionary offers these synonyms for gnarly: awesome, cool, sweet, rad’ (among others). I think these words express my sentiment. Oh, sure, Air Cam is no LSA (too many engines). It’s no ultralight (too many seats, too heavy). It’s not certified, being a 700 to 1,500-hour kit-built aircraft. Most who look lovingly at Air Cam see it as somewhat costly (though even with two expensive engines it’s priced less than many high-end LSA). Regardless, I love Air Cam as one of the most thrilling airplanes I’ve ever flown. If you haven’t sampled it, you have a great experience ahead of you.

Of course, you should never do reckless or unsafe operations in any airplane but Air Cam behaves differently than nearly any other aircraft. I have executed a single engine take-off in the machine, just to prove it could be done. I was careful to have plenty of runway and no traffic but most twin aircraft wouldn’t — indeed, cannot — even attempt such a feat. When losing an engine in Air Cam, the event is almost hard to notice … unbelievable, perhaps, but factual. Air Cam can climb 300 feet per minute on one engine. These capabilities make flying low over orange groves an acceptable flight.

People who own an Air Cam are as diverse as folks who buy any other airplane. However, I’ve never talked to a single one who didn’t report having “fun,” even those who use one for some serious purpose such as aerial photography. Air Cam opens the door to flying you might never try in another aircraft and with foresightful planning, good maintenance, and accommodating weather, you can enjoy an Air Cam in ways that are simply unrivaled.

After the National Geographic Society commissioned designer Phil Lockwood in 1994 to create an aircraft to allow photographer Nick Nichols to fly over the Ndoki rain forest in Namibia, Africa, the design has been widely marketed. Nearly 200 are flying around the USA and other countries. Selling points besides twin-engine safety are its slow stall (39 mph), low fuel burn (3.5 gph at 50 mph … for both engines), and cruise from 50-100 mph. A kit with two Rotax 912 ULS engines will set you back over $100,000 but the smile it can create is nearly priceless. Two hundred horsepower produces stunning flight qualities even those 180-hp Cubalikes can’t match.

I took a wonderful trip to the Florida Keys in an experience documented in this article. We flew a single engine LSA and it was great fun but we couldn’t enjoy the island chain the way you can in an Air Cam, especially one on floats (photo). Recently the company, which often hosts fly-outs for its owners, visited Marathon Key not far from Key West. With those twin engines, and even better with floats, I’m guessing those pilots and passengers saw the islands in ways nearly no one else on the planet has ever experienced. That would make a wonderful Christmas present.