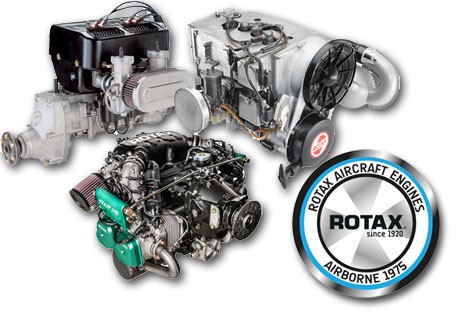 The Rotax 642 (upper right) was certified in 1975 and provided the basis for the successful story of Rotax aircraft engines. Rotax’s 642 was a two-cylinder, air-cooled engine with electric start and TBO of 300 hours. The very popular 503 (upper left) is a two-cylinder, two-stroke fan-cooled engine with 50 horsepower. More than 33,000 503s were sold. 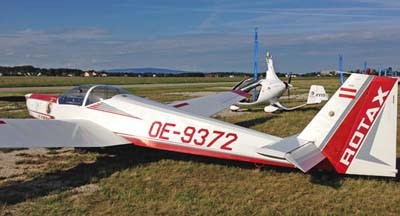 The first-ever Rotax 912 was installed in this motorglider seen at the airfield Rotax uses for testing and events. 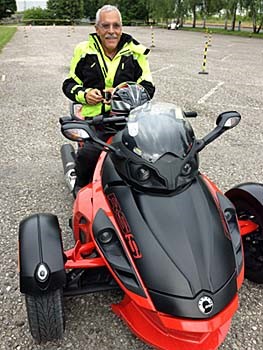 Aviation engines are only part of the Rotax product line. Here AVweb’s Paul Bertorelli, a motorcycle enthusiast, samples the Can-Am Spyder as did many of us attending the Rotax Fly-in in 2014.

Aircraft engine giant, Rotax BRP has reached an anniversary: forty years of making powerplants used around the world by airframe makers of ultralights to Very Light Aircraft. Thus, it was hardly a surprise when Light-Sport Aircraft came along eleven years ago that the Austrian company immediately became the largest supplier of engines … capturing an estimated 80% of the market, even while other ASTM-approved engines are in use from Continental, Jabiru, Lycoming, and HKS. New candidates include Superior’s Gemini Diesel and, of course, the ECi Titan 180-horsepower engine has seen good acceptance. Then we have another batch of engines for kit-built aircraft including Viking (based on Honda), UL-Power, AeroVee (VW), AeroMomentum (Subaru), Corvair, and more.

Despite the many other choices, Rotax has retained a dominant position. I’ve long felt that while it can be challenging to bring a new airframe to market and win some customers, it is even harder to introduce a new engine. Rotax got in the light aircraft segment early and runs a very tight ship, carefully managing quality and production eficiency. This has surely had much to do with their leading share even while prices of the kit engines are often less.

After 40 years of solid history, some background would be useful.

The company wrote, “In the early 1970s, a number of passionate aviation enthusiasts, all members of the local flying club and working at Bombardier-Rotax (BRP-Rotax today), wanted to develop aircraft engines. At the same time, there was a noticeable sales increase of Rotax spare snowmobile engines in North America. BRP-Rotax learned that a number of these engines were sold to the aviation market where snowmobile engines were adapted for aircraft applications.”

They continued, “Engines for recreational aircraft were usually spinoffs of automotive and industrial engines, which were extremely heavy. Rotax engineers noticed that the compact and lightweight design of Rotax engines perfectly fit the needs of the aviation market. The outcome was a decision to enter the aircraft engine market.”

In the early ’80s, the peak of the ultralight flying era, some well-known Rotax two-stroke ultralight aircraft engines were launched. The most popular was the Rotax 503 UL engine, a two-cylinder, two-stroke fan-cooled engine with 50 horsepower. More than 33,000 engines of this model were sold.

The popular single cylinder, 28-horsepower engine called Rotax 277 UL was mainly sold to North America in the first few years of production. This success followed the arrival of FAA’s Part 103 ultralight vehicle category that needed a smaller but adequately powerful engine that the R-277 served. Later developments for that market were the 377 UL and the 447 UL engine, both two-cylinder, air-cooled engines, offering 36 to 46 horsepower.

“We will always remember that the Rotax two-stroke customers were the basis for our success. Without that market, Rotax never would have entered the aviation business,” observed Thomas Uhr, Vice President of BRP-Powertrain and General Manager BRP-Powertrain GmbH & Co KG.

In 1985, Rotax began developing the Rotax 912, a project dedicated to the aircraft market. “For the very first time, all conditions needed for an aircraft engine were considered, like high security, high-quality standards for airplanes, etc.,” said Rotax. For experimental airplanes and gliders, power-to-weight ratio was one of the main targets.

A major advantage in the development of the Rotax 912 engine was the opportunity to influence the whole engineering design. The R & D effort was impressive but the company said the big advantage was the ability to supervise the project from concept to production. “With the development of a flat four-cylinder engine, we wanted to reach the next level — the 80-horsepower engine category. The engineers of the 912 engine concept were pilots. They fully understood the market requirements. To put it in a nutshell, the engine was developed by pilots for pilots,” said Uhr. In 1989, Rotax 912 UL engine serial production began. A 100-horsepower model followed and has become the biggest selling in LSA.

In 1993, the Rotax 912 engine was modified and equipped with a turbocharger for an altitude flight test. Using the new powerplant an HK36 Super Dimona reached an altitude of 33,000 feet, proving the concept. The company started the development of the turbocharged Rotax 914 engine with 115 horsepower, and serial production began in 1996.

More than 50,000 engines of the Rotax 912 / 914 series have been sold since 1989, resulting in more than 45 million flight hours of the fleet, reported Rotax. With more than 175,000 engines sold in 40 years, Rotax aircraft engines dominate the Light-Sport and ultralight aircraft industry. “With 19 authorized distributors and a network of more than 220 points of sale,” Rotax noted, “BRP supports customers worldwide and supplies Rotax aircraft engines to more than 80% of all aircraft manufacturers in its segment.”

In the following video, hear two Rotax leaders describe an award they received and talk about the Rotax 912 iS Sport engine (or you can watch the video right here on ByDanJohnson.com where you never have to sit through YouTube’s opening video ad) —