We again have the pleasure of a flight review from British aviation journalist, Dave Unwin. Here’s his report on SD-1… —DJ

Having strapped the SD-1 on (well, that’s what it feels like) I gesture at the fuel sight tube. “Looks like around five gallons,” I said to UK agent Jiri Krajca. “So, how much playtime do I have, about an hour and a half?”

While some aircraft companies seem determined to price themselves out of existence it’s always refreshing to discover a new, fun aircraft that is genuinely affordable: the SD-1, which can be flown away for the equivalent of less than $30,000. In the USA, this is available as a kit that further lowers the investment (see video below).

Visually, SD-1 looks a bit like TEAM’s Mini-Max although it is actually a clean-sheet design from Igor Spacek intended to meet Britain’s SSDR rules (very similar to FAA’s Part 103). 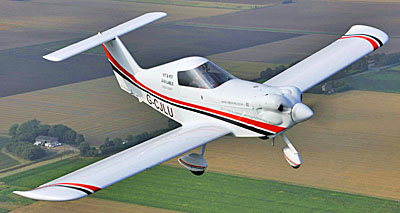 The wings are built from a composite main spar with carbon caps which carries glued ribs made of extruded polystyrene and covered with very thin plywood and composite, upturned wingtips. Almost the entire trailing edge of each wing consists of full-span flaperons.

SD-1 uses an all-flying tail or stabilator. Flaperons and stabilator are actuated by a combination of pushrods and bellcranks, with the mixer for the flaperons under the seat. Cables actuate the rudder, while springs (also under the seat) are used for pitch trim.

Jiri recommended using a soft field technique with take-off flaps, so I slowly open the throttle with the stick on the backstop, and then just ease it forward as the elevator starts to bite, with the aim being to hold the nosewheel just clear of the ground. 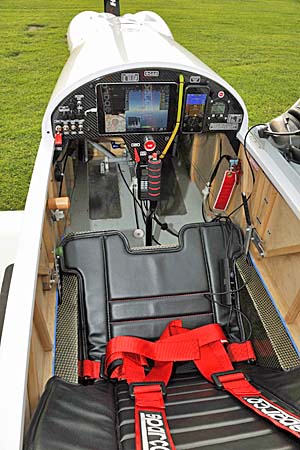 Primary instrumentation in this SD-1 is based on Apple; an iPad and iPhone. photo by Keith Wilson/SFB Photographic

Controls feel crisp, taut and powerful. Handling is very good, with plenty of control around all three axes and no discernible break out forces.

Examining the stability reveals Minisport to be positive directionally, neutral laterally, and just barely positive longitudinally. In fact, having pitched up to lose 10 knots from a comfortable 80 knot cruise and then releasing the joystick, I wonder for a couple of seconds if it is actually divergent in pitch as the ground began to loom through the windscreen. About the time I figured that as the airspeed was still increasing so perhaps I’d better intervene, the nose slowly rises and after several oscillations SD-1 reluctantly returns to the trimmed speed. Mnisport is quite short-coupled, and the slightly soft longitudinal stability is probably exacerbated by the all-flying tail.

Slowing down for a look at the stall takes a while. Minisport is a slippery little beast, and the low flap-extension speed (56 knots) doesn’t help. For the first stall I leave the flaps up, and at around 45 it starts to mush earthward with an increasing sink rate. A departure stall with take-off flap and power is also quite innocuous. However, the full flap stall is a little disconcerting, basically due to flaperons reducing roll authority at slow speeds. 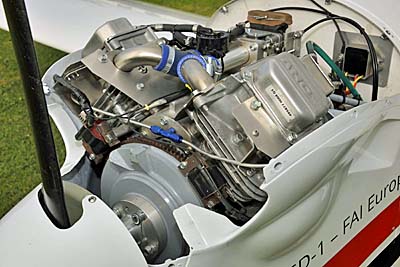 While this vee-twin appears to fit perfectly in Minisport, you will see in the video below that Americans may choose the Hirth or another engine. • photo by Keith Wilson/SFB Photographic

Back in the pattern I take care to ensure the speed is below 60, and also apply plenty of nose-up trim before lowering the first notch of flaps as suggested in the POH. For pilots converting onto the SD-1 from more traditional types such as Cessnas and Pipers, it cannot be emphasized enough to control speed carefully on lightweight aircraft. Given Minisport’s low flap-extension velocity, your speed must be monitored carefully and the flaps retracted promptly in the event of a missed approach.

On approach, the field of view is excellent and the SD-1 slides down towards the runway as if on rails; my first landing is eminently satisfying. If you need to lose added height and don’t want to take your hands off the controls to reach for the flaps I discovered Minisport slips nicely.

I could’ve cheerfully spent all afternoon performing touch and goes on Fenland’s delightful grass runways but — with some reluctance — I conclude that perhaps I’d better let Jiri get home in the daylight, as Minisport doesn’t have lights. For the final landing, I deliberately land slightly long, completely ignore the brakes and still have to add power to turn onto the taxiway that parallels 36/18. You don’t need much runway with an SD-1!

I really was rather taken with the Minisport and would love to own one. I’d probably go old school and have an open cockpit (if possible), tailwheel undercarriage and analogue instruments plus I’d love having an electric starter! Repeating… American buyers assembling a kit can choose many options not available elsewhere.

Americans should view the following video to learn more about SD-1 Minisport in the USA.