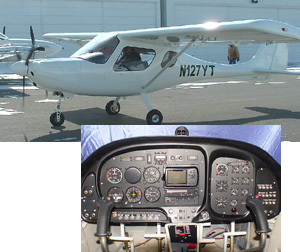 The #1 U.S.-built Storm Rally rolled out of the hangar in basic white as its owner plans a custom paint job (wheel pants will also be added). For more info, call 269-273-8441 or email Air Elite Aviation.

Michigan-based Prestige Aircraft recently rolled out their first U.S.-built Storm Rally. Examples of this attractive high wing aircraft seen at airshows like AirVenture 2006 were manufactured by the Italian company that created the design. Now, Prestige builds the Rally under an agreement with Storm Aircraft and plans to add the low wing Century and amphibious Sea Storm in the future. *** Rally, which won its SLSA approval in early 2006, is a carbon fiber and Kevlar reinforced composite design that comes equipped with basic flight instruments and equipment for VFR day operation including a turn-coordinator; tail-strobe; ICON 200 radio; and Garmin transponder with an altitude encoder. Unlike many other brands, national distributor Air Elite Aviation says, “All aircraft models come with a limited two-year, or 1000-hour warranty.” Rally can cruise at 107 knots (75% power) and, with 34 gallons of usable fuel, it boasts an 800 nautical mile range.