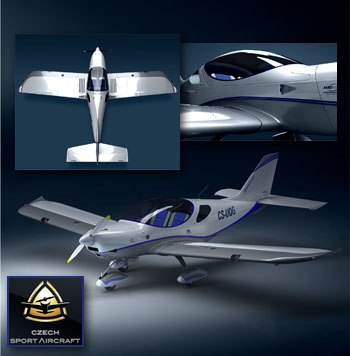 A long and winding trail in the sky, this story is… Once upon a time an American traveled to the Czech Republic, founded a small business to build kit aircraft, grew that into a full-fledged LSA producer, gained an investor with whom he later disagreed, and lost his enterprise. That’s the shortest possible take on it. When Chip Erwin’s Czech Aircraft Works dissolved, the chrysalis produced Czech Sport Aircraft… the new owner of the SportCruiser (photos). As Chip takes an unplanned sabbatical from this business, the new team under Martin Zikes is taking action. *** Czech Sport Aircraft (CSA) says its roots date back to 1934 when “a group of aviation enthusiasts opened a small workshop and started to build gliders.” Around World War II a related factory was seized by the Luftwaffe and served as a repair and maintenance facility. “After the war the company worked on all types of airplanes then flying in Czechoslovakia. During the ’50s and ’60s the factory manufactured the famous L-200 Morava, Z-37 Bumble Bee, and L-29 light military training jet. After the Velvet Revolution, the company was acquired by Aircraft Industries, the manufacturer of the legendary L-410 and L-13 Blanik gliders.” *** A late-breaking 2009 development involves CSA establishing cooperative-ownership facilitator LetsFly as the national distributor. The Czech manufacturer recently completed its LAMA ASTM Compliance Audit successfully and has established U.S. service centers for the 89 SportCruisers presently registered with FAA.