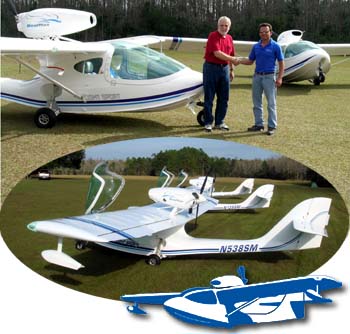 The “night before Christmas” was special as we logged what may be the final approval of 2007. Carlos Bessa of SeaMax USA called to say his efforts over the year paid off with a fresh airworthiness certificate. How’s that for a Christmas gift!? SeaMax completes a trio of flying boat LSA. *** The first amphibian certified was the CZAW Mermaid in February 2006. Second was the Colyaer Freedom on January 2007. SeaMax makes three but could be the first to log customer sales. My previous SPLOG on SeaMax was followed with several more hours logged on this beautiful amphibian. She’s a light weight high performer that takes some familiarization but is deluxe in many ways and has achieved notable market success with 33 SeaMax aircraft delivered in 2007 and 72 presently flying worldwide. Carlos reports 12 will be delivered to the USA in 2008, so interested pilots ought to pony up a deposit soon. The first two examples will be offered at an intro price of $127,000, a relative bargain among floatplanes. *** Aiding Carlos in the SLSA approval process were designer Miguel Rosario, Francisco Dias, and Carlos extends special thanks to Walter Barros DeCastro.