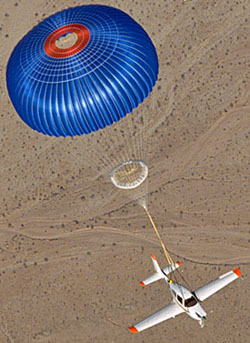 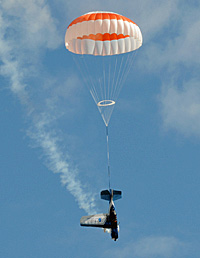 A South American Rans being flown aerobatically is seen under canopy. photo by Gabriel Luque, courtesy of BRS 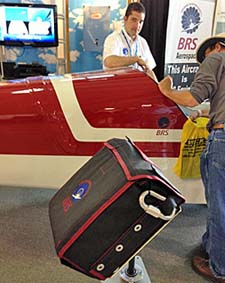 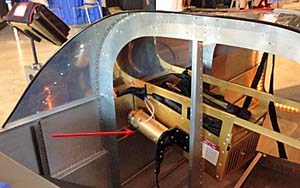 For 18 years I worked with a great team at BRS Parachutes (as it was then called; they since renamed it to BRS Aerospace as they ventured into defense contracting). I left more than a decade ago and this website has since been my new home. I worked at BRS before parachutes were accepted and it was a great challenge and joy to help bring this life-saving product to market. The huge breakthrough that allowed BRS to gain the level of mainstream approval it enjoys today was one company: Cirrus Design. Co-founder Alan Klapmeier had lived through a mid-air collision and was determined his SR20 would have a whole-airframe parachute on it. While the ’20 and ’22 have much to speak for them, the models were distinguished in all of aviation by being “the parachute airplane.” Having a BRS system on board certainly helped and may have been one of the main reasons for the company’s success — with more than 4,000 aircraft sold in the last dozen or so years that are otherwise not aviation’s strongest period.

I got an excited email from an old friend and company founder, Boris Popov (video), the founder of the BRS enterprise. In his current role as Senior VP of Aviation Sales, Boris wrote, “[It was a] great weekend for BRS saves!” Given the nature of recreational use of airplanes, weekends are fairly common times for airplane flights and therefore potential parachute deployments. Here’s the twin events that Boris related: (1) In Claveau, France a Cirrus SR22 (tail “numbers” F-HAPH) lost power over unlandable terrain. Two people were on board and had no injuries, making two “saves” numbered 304 & 305 for BRS. They deployed at 2,000 feet above the ground. (2) In Buckhannon, West Virginia, an SR22 (N450TX) lost power on long final approach, deploying at about 550 feet above the surface. The plane and sole occupant pilot landed on pickup truck but he walked away as did the French couple. This makes “save” 306 for BRS. I can say from my days inside the building that these reports truly make the day, not only of managers and stockholders — and certainly not least the saved occupants — but for the unsung hero technicians who labor carefully to build and assemble the BRS systems. Congratulations to all!

At AirVenture 2013, BRS showcased their product for the RV-7 & RV-9. Regretfully, no such product is presently in design for Van’s LSA model, the RV-12, but hopefully it will follow. In Oshkosh BRS displayed a fuselage mockup (photos) to show where the unit is located and how the parachute system is positioned for optimal function. The round cylinder (arrow) is the rocket, a very powerful, instantly accelerating motor that can most authoritatively punch through a weakened panel, remove the large but densely packed canopy from its cradle, and pull it to what’s called line extension. Time to a taut line is about one second after the handle is pulled in the cockpit. As has been repeatedly shown this can be successful to surprisingly low altitudes, as little as 200 feet depending on the situation. I’ve witnessed the testing thoroughly and am always pleased to have an airframe parachute on an airplane I might fly. Van’s Aircraft makes a great, well-proven design but things happen beyond the control of the pilot (mid-air collision, loss of engine at night or over unlandable terrain, loss of control, incapacitation of the pilot, etc.)

Our great friends over at General Aviation News wrote recently about BRS’s news for Cessna 182 owners. (If you don’t get GA News’ “The Pulse of Aviation,” click the link to sign up for the free daily eNewsletter.) As mentioned above, I spent years at BRS and one of the most common resistance points was that adding a parachute would decrease payload. It does, but come on! — if you ever need a parachute and you don’t have one … well, you’ll never need one again. So today’s update from The Pulse reported that BRS has a great fix, at least for Cessna 182 owners (sorry LSAers, not yet). The Pulse, editors wrote, “BRS Aerospace … recently reported that Cessna 182P and Q model owners who install a BRS system will gain a 160-pound gross weight increase. The BRS is STC approved for the Cessna 172 and 182 models. This new iteration of the BRS will increase the net useful load by 65-75 pounds after the installation of the parachute, and will not require any modifications or additional hardware to the airframe once the BRS unit is installed, company officials said. ‘Now, operators can fly with the assurance of a BRS on board,’ Boris commented, ‘and have an additional 65-75 pounds of useful load to utilize as they wish. This is a win/win opportunity for operators.’ In addition, this new option will be at no extra cost to the purchaser, and is now included in every BRS C182P and Q sold, officials noted.”