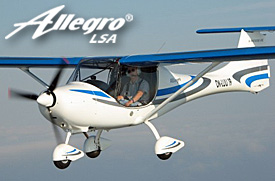 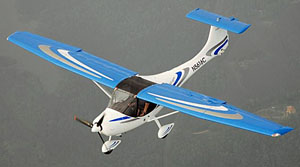 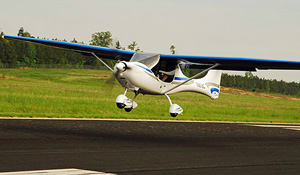 Allegro comes in for landing with a student at the controls. photo courtesy LSA America

LSA America now produces the Allegro in Littleton, North Carolina and anticipates their first U.S.-produced LSA approval before Oshkosh 2011. Despite Czech-based Fantasy Air’s ceasing manufacturing several years ago, Allegro did well enough in the first couple years to still retain the #14 rank. *** Exciting as this now-Made-in-the-USA story may be, this article has a different focus. I want to tell you about an older Allegro, one that has logged more than 3,500 hours, nearly all of them doing training. *** With a few other long-serving LSA that I’ve been told about, this addresses the matter about Light-Sports being durably built to perform instructional flying over an extended period. Some pilots believe lightly built LSA cannot handle the duress of students learning to fly. *** Allegro (N50631) appears to disprove the argument that LSA aren’t tough enough. New factory operator Doug Hempstead stated, “The composite fuselage has proven itself in a flight school setting and aluminum wings make [Allegro] affordable to repair.” He continued, “[Our trainer] is an Allegro 2000, the design built from 2000 to 2006.” It was put in service at B Bar D Aviation Flight School with 200 hours. Doug said, “We now have over 3,500 hours total time and are barely 500 hours from our second engine overhaul.” *** While doing some of the hardest duty in aviation he reports this particular trainer has experienced but a handful of maintenance cancellations. “We recorded only two weeks of down time in six years,” stated Hempstead. “One hundred hour inspections take about eight hours and are often done overnight to avoid flight training disruptions.” *** “We are logging about 90 hours a month on this aircraft and total figures for 2010 were 1,085 hours,” boasted Doug. “Our peak month logged 145 hours.” During 2010, the flight school soloed 20 people; of those 17 now have either their Sport or Private Pilot Certificates. Another student went on to earn his Sport CFI and now works for Doug and Betty Hempstead. “From our first solo in October 2005 we have soloed 84 students 11 of which now own Allegros,” Doug noted. “Another 44 people have gotten their BFRs and became current again. Each of these people had lapsed flying from 2 to 15 years.” *** All this yet Allegro is one of the lightest LSA. With a max takeoff weight of 1,320 pounds, empty weight is just 622 pounds on average, yielding a max useful load of 698 pounds. Since Allegro holds 17 gallons (102 pounds), payload is an impressive 596 pounds. A few other specs: stall with flaps extended 40 mph; cruise at 75% 120 mph; climb 1,000 fpm; glide 12:1. Come see the Allegro at the LSA Mall at Oshkosh 2011 or check LSA America’s display in the ultralight area, space 933.