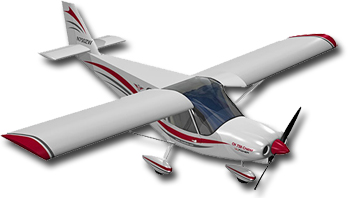 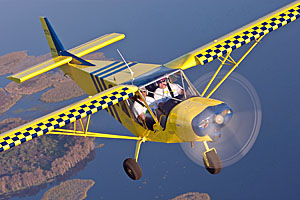 Seen above is the popular, roomier CH 750 STOL, which complements the CH 701 that remains in production. Watch our CH 750 video.

At Sun ‘n Fun 2013, big kit manufacturer Zenith Aircraft debuted their new CH 750 Cruzer. Is it truly something new under the Sun (‘n Fun)? Zenith said, “While influenced by its well-known STOL predecessors — STOL CH 701 “Sky Jeep,” CH 750, and four-seat CH 801 sport utility aircraft — the CH 750 Cruzer is an all-new design.” Company president Sebastien Heintz observed that many customers do not need off-airport capability or extreme STOL (short take-off and landing) performance so his team optimized the new design for cruise and more conventional hard-surface airports while yet retaining the popular enlarged cabin features of the STOL CH 750.

Zenith‘s new Cruzer 750 sports a brand-new airfoil with a single streamlined strut. The empennage is also new with a symmetrical stabilizer and a shortened horizontal tail span. The vertical tail features a fin and rudder replacing the traditional all-moving vertical tail design of the STOL series. Not needing big tires for rough fields, Cruzer has smaller 5.00 x 5 aircraft wheels and new wheel fairings. The instrument panel of the new design is also wider and more conventional than the STOL CH 750. The earlier model has a narrower instrument panel to improve forward visibility in extreme nose-high attitudes associated with STOL flying.

Sebastien flew the new Cruzer 1,000 miles from the factory in Mexico, Missouri. The speedier ‘750 is powered by a UL350iS 130-hp fuel-injected engine from UL-Power. It also boasts the latest Dynon SkyView glass panel display system. The Cruzer on display at Sun ‘n Fun weighs 780 pounds yielding a useful load of 540 pounds at a LSA gross weight of 1,320 pounds. The company reports cruise speed is 118 mph (103 knots), rate of climb is 1,200 fpm, and stall speed is 39 mph (34 knots). Existing firewall-forward engine packages are readily available for the Continental O-200, Rotax 912 series, Viking (Honda), Jabiru, and Corvair engines. Component kits are scheduled for delivery starting in May 2013.