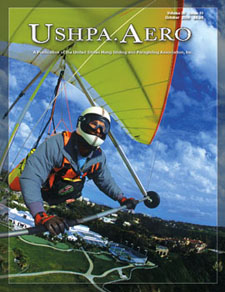 While not the permanent name of the magazine, the masthead will certainly reinforce the new web address.

For more than 20 years I served on the board of the U.S. Hang Gliding Association, or USHGA. …or some called it phonetically, “Yoosh-Ga.” During my tenure on the 25-person board, the better-organized hang gliding group assimilated the paragliding community. Despite lengthy and passionate debates, the name of the association did not change and its magazine was still called Hang Gliding. However, as the paragliding percentage grew toward half of all members, it became a smart move to rename the association the U.S. Hang Gliding and Paragliding Association, abbreviated as USHPA. *** Now the 10,000-member organization has a snappier web address — USHPA.aero (formerly USHGA.org) and what better way to communicate this update than to splash it across the top of their monthly magazine, which has long included info for both soaring disciplines. The magazine name won’t last — it will be used only for four months. Afterward, they’ll revert to the masthead you can see on the left column of ByDanJohnson.com.