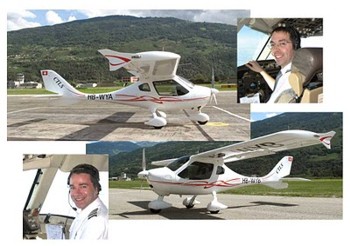 Two wild-and-crazy Swiss airline pilots decided to take a busman’s holiday – one hell of a busman’s holiday – by taking two Flight Design CTLS S-LSA on a little jaunt, in celebration of the birth of aviation in Switzerland 100 years ago. *** Their destination?  The airport they launched from April 30th: Sion, Switzerland. *** The catch?  Before they return to Sion, they’re flying around the world! *** Dan Johnson’s got a detailed writeup on his Splog but the short tell is the pilots, Yannick Bovier and Francisco Agullo, will fly 27,500 miles over 18 countries, five continents and two oceans.  *** Both craft are modified to carry extra fuel – 120 gallons each, instead of the stock 35 gallons.  *** They’re also carrying survival gear including water ditching rafts as their route crosses both the Atlantic (Africa to South America) and the Pacific (America to Viet Nam). *** As of today they’ve made it across from Africa to Natal, Brazil. *** Keep track of their progress and get the in-depth story on their website. *** Bon Voyage Francisco and Yannick!