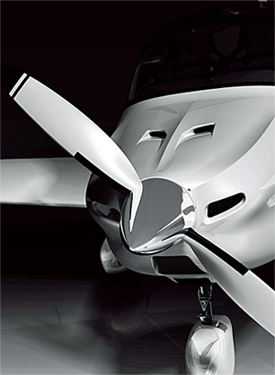 Tecnam teases with this artsy black and white image of the Astore’s nose cowl. The new LSA will be unveiled at Aero 2013. 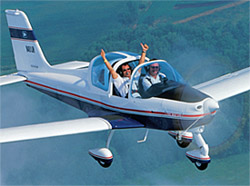 The low wing Sierra has more FAA registrations than any other Tecnam Light-Sport model. 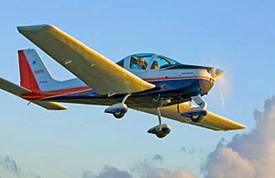 Astore may look similar to this Sierra but we’ll have to wait for its European debut to get the whole story.

Tecnam announced that it will reveal their “Astore” next generation Light Sport Aircraft at Aero Friedrichshafen 2013 in Germany on April 24th. “Astore is an all-new, two-seat, low-wing airplane that offers superlative performance,” wrote company officials. The Italian company celebrates its 65th year in 2013 and saw fit to name the new model accordingly. “What could be more fitting in this special anniversary year than for Professor Luigi Pascale, Tecnam’s legendary head of aircraft design, to name his new creation in honor of his first production aircraft, the P48 Astore.” Tecnam has a tradition of naming models for the year the design was introduced.

Tecnam said their new Astore “affords the pilot the smoothest and most pleasurable flight with innovations such as an Apple iPad® mini supplied with each aircraft as standard.” They’ll use a Levil G mini WiFi connection to supply information for the smaller Apple tablet so it can act as the Astore’s Primary Flight Display. Compatible third party applications suited to the iPad® mini will give the inexpensive tablet novel and ever-evolving capabilities. Tecnam reported that they will pre-install a dedicated app useful to compute the actual weight and balance and provide checklists specific to Astore. The iPad® mini will also include all Pilot Operating Handbook sections.

Designers created “a new ergonomically designed interior allowing for enhanced all round visibility, controls and switches that can be easily reached, and the use of softer materials affording a more comfortable flight.” To power the Astore, Tecnam will let customers choose the carbureted Rotax 912ULS, the newer fuel-injected 912iS, or a turbocharged Rotax 914 engine.

“We have built our reputation at Tecnam on producing airplanes that offer outstanding value, beauty, and efficiency,” said Paolo Pascale, Tecnam’s Managing Director. Astore joins a fleet of LSA aircraft including the Echo in several variations, Eaglet, Bravo, P2008, and the also low wing Sierra (nearby photos). Although all have sold well in the USA, the all metal Sierra has more FAA registrations than any other single model, so it would appear Professor Luigi and Director Paolo Pascale are appealing to those who prefer this style of construction. LSA fans will get their first chance to see Astore and to get more information at Aero. The show runs Wednesday April 24th to Saturday 27th and ByDanJohnson.com will be sure to update this article after viewing the new model.