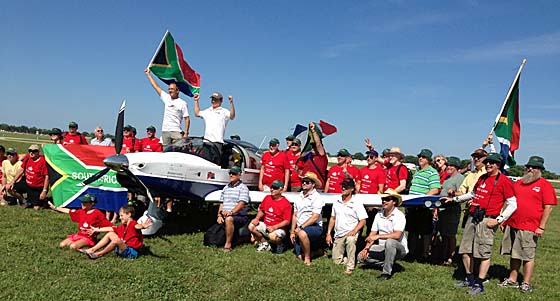 South African long-distance pilots Mike Blythe and Patrick Huang arrive to cheers and a warm welcome from dozens of their fellow countrymen. Cameras were clicking and videos were filming. 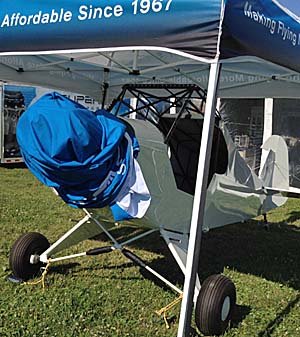 A surprise awaits under wraps for a big announcement Monday morning as AirVenture Oshkosh 2015 opens.

It’s almost time! — The tents are in place. Most of the displays are built. Airplanes are already parked by the thousands in EAA voluminous parking areas. The campground and every hotel room for miles is packed full. While the usual pandemonium reigns the night before opening, it is a familiar scene that somehow, almost magically resolves into a ready-to-go show on opening day only hours away, tomorrow, Monday July 20th, the earliest start to AirVenture Oshkosh in years.

Today, I got a text — thank some tech guru for inventing text, which always seems to get through quickly even when phone calls do not, with hundreds of thousands of attendees all using their smartphones at the same time.

The text from The Airplane Factory USA‘s Matt Liknaitzky read, “Mike [Blythe] and Patrick [Huang] are arriving in the Sling 912 iS … if ya wanna see them.” We did, so we dashed north to the North Aircraft Display Area space.

Mike and Patrick have been making their way to AirVenture, arriving precisely on time in perfect Wisconsin weather — 80s with fresh breezes blowing. Lots of airplanes are arriving, so what’s the big deal about this one, you may ask? This intrepid pair of aviators arrived from South Africa, a long distance, most probably the longest flight of anyone arriving at Oshkosh and they did this in their Light-Sport Aircraft with its 100 horsepower Rotax 9-series engine. Woo-hoo!

The two pilots are taking a break working the show at Oshkosh because after it ends, they will densely repack their LSA and head off for an even longer ocean crossing, this time the Pacific, en route to Taiwan where Patrick runs The Airplane Factory Asia.

But, no, it doesn’t end in Taiwan. After transacting some business, the bird will take off again for another long voyage all the way back to South Africa. Perhaps the most amazing fact: this is TAF’s main man Mike Blyth’s third ’round the world flight in about as many years. Think about that the next time you flight plan a long cross country across this great nation of ours!

On a completely different topic, I have a little surprise to offer you. Let’s see how much detail the cleverest among you can discern from this image (nearby photo): a taildragger with its engine under wraps. The picture might tell you something if you study it carefully, but can you guess the entire message?

Several big announcements are expected during AirVenture 2015. One well publicized example is Icon’s first delivery, reportedly to EAA for their Young Eagles program though we will have to wait until Monday morning to get confirmation of this rumor. Today I went out to fly the Icon A5 but rough weather yesterday disturbed the schedule and the company wants me to fly with the CEO, Kirk Hawkins. That is now rescheduled for Wednesday, weather and schedules permitting, though I feel sure it will happen this week and I look forward to reporting it. I spoke with Kirk and examined the twin Rotax 912 iS Sport-powered A5s that were busy flying a reported 173 owners in town to get their first exposure to this long-awaited airplane.

We are also expecting big news from Rotax, Beringer wheels and brakes, Dynon, Kolb, and others. Stay tuned for more.

Plus, I’ll unveil what is under the blue wrap disguising the powerplant on the unnamed taildragger. Stay tuned!