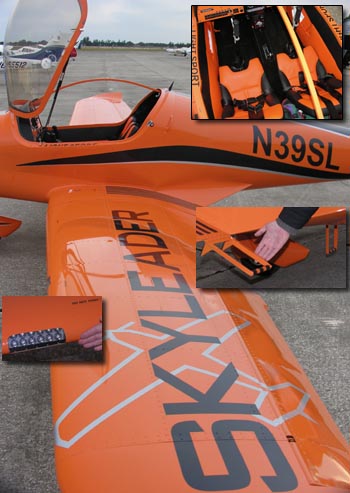 SEBRING 2008 — Every outdoor airshow organizer must cope with weather. Florida was beautiful before the Sebring Expo opened. Cold, strong wings the final day brought out jackets but several companies continued demo flying. Plenty of flights were taken during the event and good sales were reported by several companies including Flight Design, Cirrus, Cessna, and others. Conditions in the southeastern states prevented some aircraft from reaching the show though that didn’t stop sales; Higher Class Aviation sold a Sport Hornet even though their showplane didn’t make it. *** Many who departed by midday Sunday (20th) missed the tardy but safe arrival of the new KP-5 from Kappa/Jihlavan …which has now become the Skyleader 500 LSA model from the Skyleader company. The restructured Czech business was recently energized by entrepreneurs and engineers that build simulators for the airline industry. They seem determined to lift the company to new heights; the late-arriving models showed various refinements (photos). *** The 148 exhibitors at Sebring ’08 appeared pleased with the show, though many complained about the hours-long sensory assault from the adjacent racetrack. The noise into the evening on the night of the LAMA meeting kept listeners from hearing speakers. Bob Wood reported on Tuesday (22nd), “I was told the race was changing its date, but have learned this morning that they may stick with the weekend they had.” He will consider other dates as needed. “I will do my best amid this shifting sand,” Bob promised. Overwhelmingly, Bob and his team got high points for the 2008 Sebring U.S. Sport Aviation Expo. The 2009 event appears certain to continue the success story.