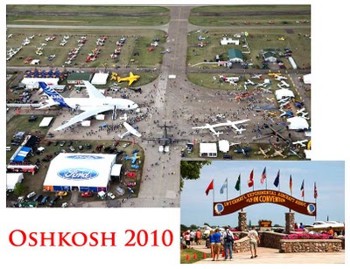 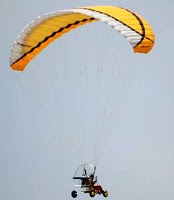 Some odds and ends to share with you: *** If you love airplanes, you’ve got to go to Oshkosh at least once in your life. And if you’re going to Oshkosh AirVenture 2010, you’ll find a lot to enjoy. *** Most anything and everything that flies is represented in some way. Here’s some highlights of this year’s events: * Week-long Salute to Veterans — WWI, WWII, Korean-era, Vietnam-era, and modern-day military aircraft, forums, presentations, and daily air shows. * the 75th anniversary celebration of the DC-3/C-47 and the B-17. * Musical concerts and spectacular shows: Opening day features Chicago (Monday, July 26th) * Gary Sinise and the Lt. Dan Band (Friday, July 30th) * A night air show featuring the “Wall of Fire,” (don’t miss this!) with a concert by Asleep at the Wheel and fireworks to follow (Saturday, July 31st) * Mass balloon launch (Saturday and Sunday, July 31st and August 1st) * Electric aircraft displays, forums, and demo flights (with an all-day World Electric Symposium on Friday, July 30th) * 500-plus forums and workshops, and nightly movies at the outdoor Fly-In Theater * Daily afternoon air show with top aerobatic performers and Spirit of Aviation aircraft auction. *** This year is my 30th visit, but Oshkosh never fails to excite. *** Also up: Michael Combs has now flown more than 13,442 miles on his Flight for the Human Spirit odyssey that will eventually carry him and his Remos GX more than 19,400 miles. He’s currently in Denton, TX (40th state so far) after a maintenance stop. Michael experienced delays Saturday and Sunday from high winds aloft and a touch of illness. *** In the photo, Michael’s Remos GX, dubbed Hope One, is tucked under the wing of Flagship Detroit — the oldest flying DC-3 in the world. *** And finally for us wattheads, the Paris Green Air Show just wrapped up and tech webzine Gizmag was there with some tasty coverage of electric powered aircraft; I’ll cherry pick the LSA-centric items in a future post, but here’s a couple teaser photos: the flight of an electric paraglider trike called the e-FunFlyer and the Green Cri-Cri mini-electric airplane with four electric motors, a joint project of EADS Innovation Works and Aero Composites.