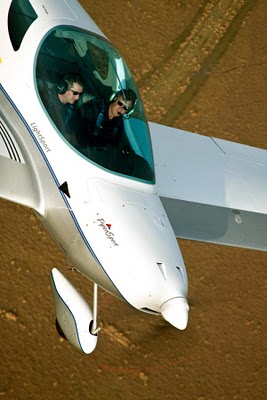 If you’ve checked into Facebook since January you may know that PiperSport has its own page that you can become a fan of (I am, along with 9,200 others so far!) *** What you probably don’t know is there’s a fascinating video interview that chronicles why and how Piper decided to add social media such as Facebook and YouTube to its marketing strategy for the already-popular LSA. *** Very very interesting, and likely a sign of future marketing efforts from ad-cash-starved LSA makers. *** To date, the only other company I know that has a Facebook presence is Gobosh, and they’ve been there for some time. *** I won’t reprise the entire video clip (it’s well worth watching), but here are some of the highlights: *** Back in January, Piper’s content creators were tasked with making a video for the imminent launch of the PiperSport (the rebadged, “Piperized” CZAW SportCruiser).  They also had to set up a Twitter feed, YouTube channel and the Facebook fan page. *** And they had a week to do it in. *** Greg Jarboe does a video interview for Search Engine Watch with Michael Kolowich of Boston’s DigiNovations, who gives a thumbnail of the entire project.  Here’s the video; in case it’s slow to load, go here: *** Things that caught my ear from the video: * The goal was to create a less formal market presence that would work on authenticity, including interviews with Piper notables including Piper’s Chief Engineer and my longtime colleague Bart Jones, the company’s Chief Pilot. * Piper wanted a “live feel.” * It had to be up in time for the January launch date at Sebring. * A PiperSport was sold online the very first week…and paid for with PayPal! * the creators input key tag phrases to help web searchers find the site, including: light sport aircraft and the brand names of key competitors — very smart. * The Facebook video was viewed more than 7,000 times the first week. * PiperSport’s YouTube channel has more than 22,000 viewings for several of its videos. *** A lot of marketing types would do well to watch Piper’s venture into social media, especially if it proves a sales success.