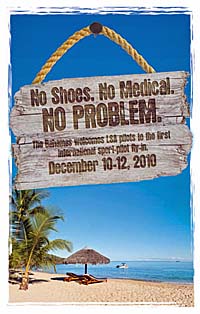 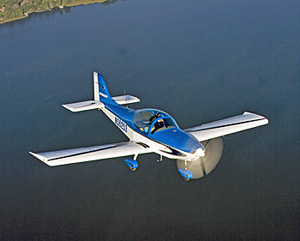 Watch a “Flying Bahamas” video to learn more about flying the islands. 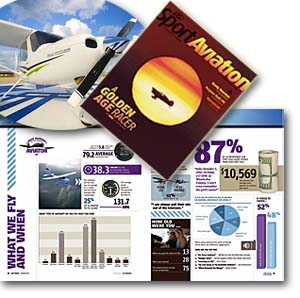 EAA published some interesting statistics in a chock-full November 2010 issue of Sport Aviation. The association will give away a Cessna Skycatcher next year.

Thanks to Jim Lawrence for keeping SPLOG full of fun-to-read info while I was massively occupied with a move of the ByDanJohnson.com and LAMA offices from Minnesota to a new home in Florida… Spruce Creek Fly-in near Daytona Beach to be precise. As I return to SPLOG, I have a few interesting tidbits involving LSA or other aircraft Sport Pilot may fly. *** Speaking of Sport Pilots, aviators with that certificate may now legally use it to fly to the Bahamas — the first country outside of the USA to accept the newest FAA license. So far, 21 LSA are signed up for the first Bahamas International Sport Pilot Fly-in. Lucky me… thanks to a generous offer from Breezer Aircraft USA boss Mike Z, my wife Randee and I get to join the over-water parade to the Bahamas. Watch video of Mike Z about his earlier flight to the Bahamas. *** Like many, I was disappointed when EAA discontinued Sport Pilot magazine but their work to upgrade Sport Aviation has met with broad member approval. I added my voice to this chorus after reading the November 2010 issue. Nice job, EAA publications staffers! Besides a great article on the Maverick powered parachute dune buggy, Sport Aviation presented some statistics in highly readable form. I want to pull out a few facts that apply to Light-Sport Aircraft fans. • EAA got 1,267 opinions on a variety of topics. • Six percent say they fly a LSA, a high penetration as Light-Sports are just 1% of the single engine fleet in America. Interestingly, only 19% of EAA’s respondents fly a homebuilt. • On average pilots fly with one passenger; hmmm, just like LSA. • Those preferring taildraggers to tricycle gear are in the majority 52 to 48%. • Two other fascinating points, I thought, were that 34% preferred an open cockpit and 40% preferred tandem to side-by-side. • A very substantial 77% prefer a joystick; no wonder most LSA use them. • And 59% prefer to land on a grass strip versus a paved runway. *** Finally, the LSA Sweepstakes continue. In 2009 EAA gave away a Flight Design MC. During May 2010, Sporty’s gave away a Skycatcher. In November 2010, AOPA awarded their Fun-to-Fly Sweepstakes Remos GX. And now, EAA is back again, this time offering a Cessna Skycatcher. Four lucky individuals have won or will win a terrific new LSA, all for the price of entering. Check out EAA’s sweepstakes at WinAPlane.com. Good luck!