Update: Unknown at the time this article was posted, Viking Aircraft Engines reports it provides the powerplant for SureFly. —DJ July 5, 2017 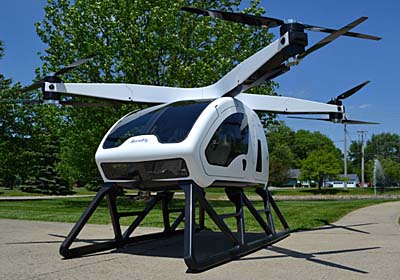 News from the Paris Air Show probably does not interest you too much, unless you care about the airliner you will fly in eight years from now. However, one article caught my interest because of a few references. (The article I found is available here.)

Here’s the parts that grabbed me:

(1) “We’re hoping it can be a light-sport aircraft type of licence,” said developing company CEO Steve Burns. “We want to keep it minimal, and we believe it’s easy enough to fly to do that.”

(2) It will be pilot-operated; controls are said to be minimal, with buttons for up/down altitude adjustment, and a joystick for forward, sideways and yaw.

OK, I get that $200 Grand is not affordable for many readers but this figure is not much more than your average high-end Light-Sport Aircraft (in fact, it’s less than the best selling LSA). As helicopters go, it is quite a bargain, although much more costly than a gyroplane like AR-1. 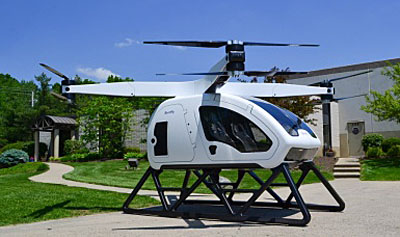 Additionally, SureFly is not on the market yet and when (if?) it does arrive, it might be lots more expensive.

Then, will FAA allow this unusual contraption to fly and where?

So, plenty of questions but I see no escape from the onrush of quadcopter variations and at least this one is piloted; it is not (yet) an autonomously flown aircraft.

Here are a few more points of interest the Workhorse (brand) SureFly (model):

• “SureFly is a personal helicopter/VTOL aircraft, designed to be safer and more stable than a typical helicopter due to its redundant design,” said the company. The design includes “four propeller arms, two fixed contra-rotating propellers on each arm, a backup battery to drive the electric motors in the event of engine failure and a ballistic parachute that safely brings down the craft if needed.”

• SureFly is designed to fly up to 70 miles at a speed of approximately 70 miles per hour, with an anticipated empty weight of 1,100 pounds and a maximum takeoff weight of 1,500 pounds. This is too heavy for LSA, of course, but not by that much and that’s today. Rumors continue to swirl around a weight increase even though such a change is likely years in the future, if ever.

• SureFly is a hybrid design and leverages Workhorse’s expertise in manufacturing electric pickup trucks (photo) for the last 10 years. SureFly utilizes the company’s experience with electric propulsion, its extensive use of carbon fiber, and with lithium battery systems. 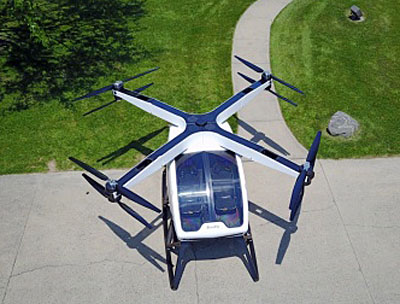 • Early models will be pilot-operated, according to the Vertical magazine article. The goal is to introduce future models featuring autonomous flight capable of carrying payloads of up to 400 pounds. To my view, every developer needs to speak to “autonomous flight” if they want to gain media coverage or raise big buck investments.

• SureFly’s controls are said to be minimal, with buttons for up/down altitude adjustment, and a joystick for forward, sideways and yaw. “An on-board computer will automatically adjust throttle to maintain altitude as the aircraft is maneuvered, with speed of travel controlled by how far the joystick is pushed,” said the company. That is hardly flying your LSA or ultralight but at least you’re not just a passenger.

“We realized we could basically make a big drone, if you will,” Workhorse co-founder and CEO Steve Burns told Vertical magazine. “The battery packs are light, most of our trucks have range extenders, which are gasoline engines that extend the range for when the battery is exhausted, and carbon fiber is in everything we do — so we kind of had the chops to do it.” Burns said SureFly has been in development for about three years.

Workhorse describes the SureFly as a hybrid aircraft, with a gasoline engine driving dual generators that provide power to the eight propeller motors. “With safety top of mind, the aircraft has two backup batteries (each powering four motors) that guarantee five minutes’ flight for an emergency landing should the main power source fail.” said Burns. He added that the aircraft will be able to maintain flight on just four propellers, and, if all else fails, SureFly plans a ballistic parachute. 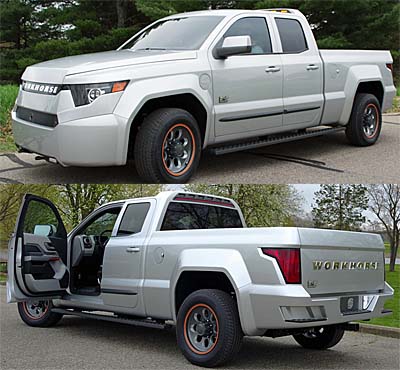 Workhorse has been making this handsome electric/hybrid pickup truck for 10 years and is leveraging that into aircraft development.

Burns claimed the aircraft would be as simple to operate as a radio control unit for a drone.

“We’re hoping it can be a light-sport aircraft type of licence,” he said. “We want to keep it minimal, and we believe it’s easy enough to fly to do that.”

Workhorse is reportedly testing different components and is targeting first flight before the end of 2017, with certification by the end of 2019.

“When we realized the price point we were going to be able to make this at ($200,000), with much lower maintenance [costs], much easier to fly and much safer, we thought we might be able to create a new class,” he said.

Workhorse is considering variations on the model, including a larger version and an autonomous model. “But to get it certified, it’s got to be piloted,” said Burns. “So, we want to get this one certified first, get our feet underneath us, and then determine what the next one might be.”