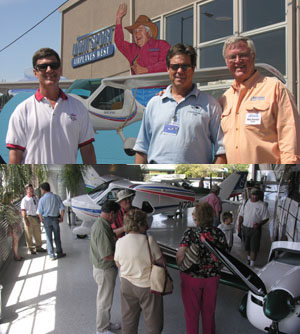 Within 24 hours of getting home from Sun ‘n Fun, several industry leaders including Evektor America’s Jeff Conrad, Flight Design USA’s Tom Peghiny, Jabiru USA’s Ed Ricks, and BRS parachute’s Gregg Ellsworth packed up and headed off to California. What motivated these men to depart so soon after a long week in Florida? They all wanted to support proprietor Mike Fletcher as he and his staff celebrated the Grand Opening of Light Sport Airplanes West. I also flew out to join the party for America’s largest LSA showroom and a grand affair it was. Estimates put attendance at 300 (I suspect that didn’t include everyone present as some 100 aircraft flew in). Representing the Sportstar, CTsw, and J-250 plus the Remos G-3, TL Ultralight StingSport, and Tecnam, LSA West has an impressive line and a large inventory of LSA in stock. The Salinas, California-based operation also conducts flight training and represents some brands up and down the west coast. Various media people attended inlcuding a writer from Flying magazine) and Salinas Mayor Dennis Donohue spoke at the ribbon cutting ceremony.