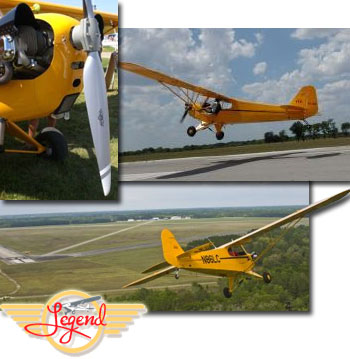 Stating that “propeller performance has more to do with a piston aircraft’s abilities–short of the pilot in command,” their new 72-inch ground adjustable composite propeller by Sensenich provides as much as 10 mph more performance on a Legend Cub. Check all Legend specs. (Lower photo by James Lawrence)

Legend has good reason for celebration (and no, this has nothing to do with Obama’s election). In the lifespan of Light-Sport Aircraft — the first deliveries reach their fourth anniversary next April — Legend was an early success…a story that continues to unfold. The Sulfur Springs, Texas producer has come a long way while handily maintaining their status as, by far, the largest American-based producer of LSA. *** Recently, Legend celebrated the third anniversary of its first Legend Cub customer delivery. In August 2005, the builder handed over the keys to the company’s first newly manufactured Legend Cub to Rich Giannotti of Long Island, New York, launching the startup company. In the three years following, American Legend and their sibling kit company, Texas Sport Aircraft, report deliveries of more than 160 aircraft (not all SLSA). *** Along the way Legend has consistently added new features or options to the classic design. A couple of the latest include giant Alaskan Bushwheel tires. At a whopping 26 inches, the oversized tire choice is essentially a low-inflation air bag. Legend said the bush tires are “reinforced and ready for rough fields; designed to expect the unexpected.” Legend now also offers a large six-foot diameter prop. Here’s my pilot report.