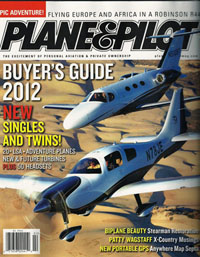 Plane & Pilot magazine is one of the world’s leading aircraft publications. 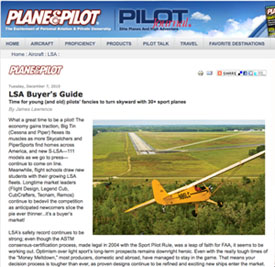 Years back I eagerly awaited Buyer’s Guides from several magazines. These were once the “database” used by many aviation writers to keep up with aviation’s rather amazing outpouring of all manner of aircraft. Several magazines competed for the most detailed entries. *** Then in 1995, the World Wide Web was born. At first changes came slowly. As the new millennium arrived (when this website was started) the web sharply accelerated in usefulness. Today, it is ubiquitous, literally so in the hands of anyone with a smartphone or iPad. *** Printed airplane Buyer’s Guides trying to list every single entry were hopelessly upstaged with web pages where the data could be enormously thorough and continuously updated. Indeed our SLSA List and our service-provider FIRM List are popular enough that we gave them their own top-of-the-page tabs. As the print publication community, in and out of aviation, struggles to incorporate the web and adjust their content to their strengths, Buyer’s Guide appear to be an endangered species. *** The good news? Light Sport & Ultralight Flying magazine’s annual Buyers Guide will appear in February (instead of its usual January release). Meanwhile we have the Plane & Pilot Buyer’s Guide issue in their January/February issue for 2012. *** Listen, I love the internet for all its speed and depth. But this P&P issue is a winner. The title — probably the second-largest circulating non-member aviation magazine — has done exceptionally well for the Light-Sport community with their own LSA Editor-at-Large (also our contributor): James Lawrence, who has created generous LSA coverage. *** So, no surprise to see a nice LSA Buyer’s Guide section plus another installment of Jim’s “Light-Sport Chronicles.” Read the Buyer’s Guide now plus we’ve asked to reformat for ByDanJohnson.com later as we did with Jim’s 2010 Review. *** Since not everyone is seeking LSA, P&P also has great Buyer’s Guide sections for Piston Singles, Piston Twins, and Turbines. Rounded out with a headset guide and other informative articles, the west coast Werner Publishing team did well.

|||| Got windshield wipers on your LSA? Unless you have a Terrafugia Transition on order, your LSA will not have windscreen wipers. Some bigger aircraft have them but lightplanes that don’t use glass windows don’t use wipers effectively. *** Pilots want to see where they’re going and Dynon‘s SkyView Synthetic Vision is not the whole answer, cool as those big infoscreens are. *** Aviation mail order giant, Aircraft Spruce has a low-cost answer. “Rain-B-Gon rain repellent is a hydrophobic coating technology that forms a chemical bond and causes the raindrops to bead up and blow away from the windshield,” explained Aircraft Spruce. “This new innovative technology is designed especially for plastic Acrylic and Lexan windshields, and has no alcohol which can harm plastic.” Check thousands of aviation products at Aircraft Spruce.