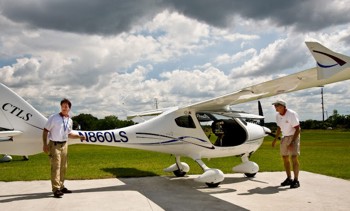 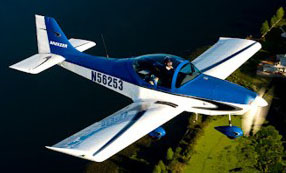 …while some, like the former PiperSport, can have very sensitive pitch and/or roll forces. 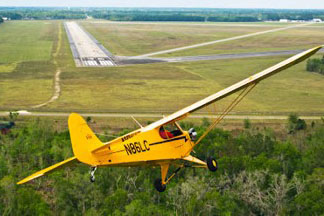 And then there are the LSA Cubs like this beauty from Legend, which handle like, well, Cubs.

My good pal John Lampson, the 6,000 hour CFII who took me through my Sport Pilot training a few years back now, continues the good fight to put well-trained, safe Light Sport Aircraft pilots in the air.John’s a CFII, so he teaches for all the GA ratings, but he’s getting a lot of students putting in LSA time on the Flight Design CTLS that’s on leaseback out of Premier Flight Center in Hartford, CT. *** John’s done well over 1,000 hours of training by now in the CT so I thought he’d be a great source of regular tips on learning to fly, or transition to, light sport flight. We got to chatting on which topic to kick off this training discussion with and before long settled on something we’d covered before and that I’ve written about in the past: how is flying an LSA different, especially for rated GA pilots used to heavier, less responsive aircraft, and what challenges does that present to the student? Take it away my bro! *** “Pilots with experience in GA airplanes,” John begins, “can have some challenges a novice won’t have, and vice versa. It can be harder to ‘unteach’ someone who’s used to a Cessna 172, 152 or Piper Cherokee. Those are all great trainers, but they are different from LSA in several important ways.” *** “And I don’t at all mean to say LSA are like a piece of crystal that you can break if you’re not careful; they’re strong, sturdy, well-designed, great flying airplanes for sure; they’re just not as heavy, for example. I tell students and transition pilots alike that they just need to fly one with a lighter touch. My students who are used to a Bonanza or Warrior can be a little heavy handed in an LSA, for example. They have relatively lighter wing loading and also sophisticated, clean and efficient airframes, like the CT which is composite and has no rivets. It’s a carbon fiber design, with a very low drag profile, and is very responsive in handling.” *** “LSA have very good engines too.” The Rotax, Jabiru, new Lycoming 233-LSA and CubCrafter’s CC340 for example have all proven themselves with many years of reliable service and easy, trouble-free maintenance. *** Matevz Lenarcyk is proving the point all over again with his current round-the-world flight that just crossed the Pacific and landed in New Zealand… all on a single Rotax engine! *** My talk with John about heavy-handed flying brought to mind the first time I flew a Toxo, a beautiful, sleek low wing SLSA monoplane that unfortunately is no longer marketed in the U.S. *** I’d been flying my hang glider around the same time. Flying a weight shift hang glider is a push-pull affair — you’re suspended from the wing’s center of gravity in a harness — which can require physically large control movements if speeds are slow. Flying the Toxo on a demo flight for one of my first LSA articles (maybe even the first), I performed a departure stall, the airplane fell off on a wing and I corrected by stuffing the stick forward with the approximate enthusiasm I would have done in my hang glider, i.e. with way more gusto than I should have. *** In a split second the highly sensitive pitch axis responded as it was designed to, which resulted in me and my demo pilot kinda sorta looking straight down at the ground. *** He quickly barked, “I got it!”, took the controls and disaster was averted. Well, not disaster, but further embarrassment at least; the sudden nose over caught me by surprise and I didn’t trust my reflexes for a second on the recovery, which he made with a practiced easing back on the stick while chopping throttle and all was right with the world again. That was exciting. *** The SportCruiser/PiperSport is/was another LSA with a very sensitive pitch response which I hear has been dampened down now to balance with the roll control, which was more nominal. *** The point being, although some LSA are certainly more GA-like in their dynamically stable control forces — the Jabiru 230 and Breezer II come to mind — an LSA, for a veteran Wichita Tin driver, can indeed surprise a first-time pilot. *** We’ll talk more with John tomorrow on this topic. Many thanks to John Lampson!