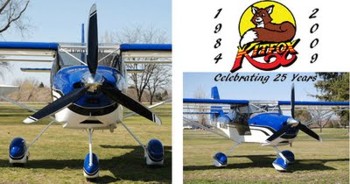 With the holiday season about to land on our heads, who’s got time to see who’s doing what around the industry? Me, that’s who. *** Hit the links below to some recent news and events: *** Chesapeake Sport Pilot hosted an event recently on its home turf, to celebrate opening a new 6,000 sq. ft. building for its light sport training ops. CSP claims 70 active LSA flight students and 300 LSA renters. *** Many years ago I built an experimental Kitfox (s.n. #124 – last I heard it’s still flying, 22 years later!) The company has been through several iterations and owner changes since then but it’s back to the future and running strong as Kitfox Aircraft LLC, run by John McBean of Homedale, ID. Now they’ve got an SLSA version of the lovely taildragger, base price around $83K, also available in tricycle gear. Check it out. *** CubCrafters has jumped into the +100 sales club this fall, according to industry watchdog Dan Johnson and in this economy that’s no mean feat. Only Flight Design, American Legend, Tecnam and Remos had broken the century mark before. Congrats folks! *** Popular flight instrument maker Dynon has set prices for the new SkyView 10″ and 7″ PFD and Engine Monitor EFIS displays.