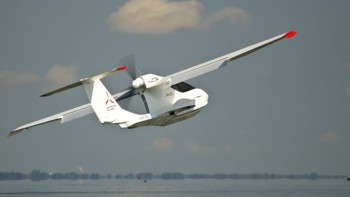 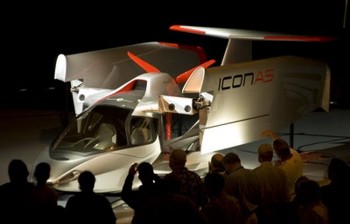 In mid-water taxi toward its anticipated production date sometime next year, Icon Aircraft was at Oshkosh again with an impressive display booth/tent/hangar, and every time I walked by, whether early morning or late at night, there were always people ogling that beautiful airplane. *** The company has made two major design changes over the last few months which are interesting and worthy of attention. (1) The wing flaps are gone, ostensibly to “simplify” pilot operations. Company spokesfolk say they weren’t getting sufficient benefit from the flaps to justify their weight and complexity. (2) A desire to work in more spin resistance has led to airframe tweaks, including wing cuffs to lower the stall speed of the composite carbon fiber SLSA. *** I and others had wondered, after our first looks at that streamlined profile when the A5 debuted a couple years back, how Icon was ever going to get stall speed below the 45-knot minimum, even with flaps. *** Icon already has an AOA (Angle of Attack indicator) on board so pilots will be able to monitor actual wing performance in reference to incipient stall, but the more docility the better in the Light Sport category, eh what? *** Meanwhile, Icon says Liberty Aerospace of Florida, which makes the composite Liberty XL2 monoplane, and Flytech Kft. of Hungary will be the prime structural composite makers for the A5. *** Stated reason for the “outsourcing” is to hasten the arrival of delivery day for the hundreds of buyers who’ve already plunked down deposits. *** As many other U.S. LSA companies already do with foreign-produced components, Icon will assemble the entire airplane, install systems and perform all flight testing and finishing, at its Southern California plant. *** The online techzine Gizmag just posted an interesting quote from Icon: the company claims fully one-third of its customers are not yet pilots!  That tells me how well Icon has penetrated the non-pilot market in its attempt to link the A5 with broadly popular recreational water sports such as jetskiing and power boating. *** Current price quote to order a standard A5 is $139,000, for delivery in 2012.