Designer Kerry Richter and his SeaRey, buzzing the pond at Progressive Aerodyne’s factory in Tavares, FL 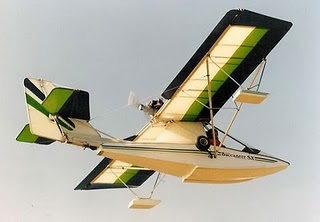 To the answer “Progressive Aerodyne!” comes the Jeopardy question, “What LSA company thumbs its nose at the bad economy?” *** Certainly one of the most-fun LSA flights I’ve had in some time came at the controls of that company’s SeaRey amphibian.My LSA pal Dan Johnson recently wrote up a piece on the amphib which spurred me to excerpt some highlights in advance of my own flight report on the lively sea bird coming soon in Plane & Pilot magazine. *** Wayne and Kerry Richter, second and third generation founders of Progressive Aerodyne, started back in the ‘70s with many memorable UL birds they created with dad/grandfather Stanley Richter. The company then was Advanced Aviation and it put out, among other craft, several iterations of a very popular ultralight amphib: the Buccaneer.Building on that success, as Dan notes, Progressive Aerodyne popped out 31 Experimental Amateur Built kits in 2010. *** After Sebring 2011, they sold 14! That’s impressive for any aviation company in these difficult times. *** All those new builders will have lots of company: more than 600 SeaRey builders are already splashing into lakes and rivers all over the world. *** The kit goes out the door at around $70,000. *** And as I reported last month, Kerry tells me the SeaRey SLSA should be through ASTM accreditation by Oshkosh and will sell in the neighborhood of $120,000 — “loaded” — a very attractive price for an amphibian. *** I went to Progressive Aerodyne’s factory in Tavares, Florida after the show to shoot and get the tour. Kerry is one busy designer. He demonstrated a folding-wing option he’s developing that can be done, on land, by one person! *** If you’ve got flying from water on your mind, this is one hot setup. Other LSA amphibs have yet to make the big splash SeaRey has.  *** A good part of that has to be its nearly two decades of design refinements and a cohort of happy owners. Here’s one well-seasoned, robust design…and one heck of a lot of fun to fly.